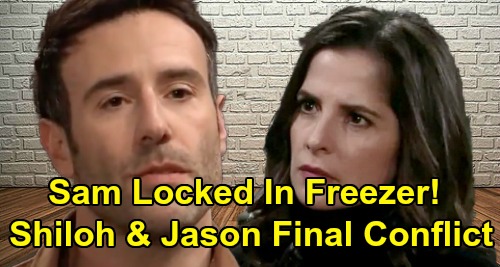 Curtis and Drew will be in panic mode when they realize Sam McCall’s in grave danger. They’ll determine that Shiloh may use Sam as his hostage – and they’re exactly right. General Hospital spoilers say Drew and Curtis will hope to reach Sam or Jason Morgan (Steve Burton) before it’s too late. They’ll likely send a flood of frantic texts and calls, but they won’t be able to get in touch.

That’s because Shiloh will already have his plot in motion. He’ll snatch Sam and lock her up in a freezer, which should give Jason some extra motivation to do what Shiloh wants. You can bet Jason will agree to anything if it means saving Sam’s life, but his prior brain injury will likely make it so a memory procedure wouldn’t be effective. Of course, Dr. Cabot might plan to give it a try anyway if Shiloh forces him to.

However, Curtis and Drew will be hot on Shiloh’s trail. They’ll find out exactly where Shiloh’s staying, so they’ll race there for a confrontation. General Hospital spoilers say Drew and Curtis will decide they need some backup, so they’ll call someone who means a great deal to both Jason and Sam. Naturally, we’re talking about Sonny Corinthos (Maurice Benard)!

Sonny will fume over Shiloh’s latest stunt and perhaps wish he’d sent him to the pine barrens far sooner. Shiloh may have signed his death certificate by resorting to this final desperate trick. It doesn’t seem like Shiloh can live much longer after going after Sam once again. Jason and Sonny may not be willing to let Shiloh stay alive after everything he’s done.

Regardless, a serious showdown is brewing. GH spoilers say some surprising people could become collateral damage. It looks like Franco Baldwin (Roger Howarth) will get caught in the chaos as well, so this will be a giant mess for Shiloh. He’ll lose control of the situation, which should bring some shockers and set up Drew’s looming exit.

General Hospital fans won’t want to miss all the action happening during the week of August 5-9 and beyond. We’ll give you updates as other GH news comes in. Stick with the ABC soap and don’t forget to check CDL often for the latest General Hospital spoilers, updates and news.