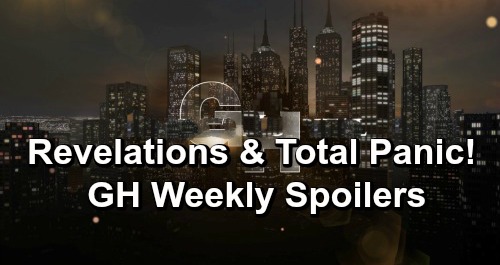 General Hospital (GH) spoilers for the week of June 10-14 tease that some surprises are in store. For starters, Harrison Chase (Josh Swickard) will get some startling information about Willow Tait (Katelyn MacMullen). He’ll learn Harmony Miller (Inga Cadranel) is Willow’s mother, so he’ll realize just how deep her DoD roots ran. Chase may be even more impressed that Willow was able to get out.

Meanwhile, Shiloh will try to charm his way out of his problems. He’ll even end up goading Sam McCall (Kelly Monaco) later in the week. Shiloh will feel confident that things are going to work out in his favor. Over with Alexis Davis (Nancy Lee Grahn), she’ll have another meeting with Dr. Neil Byrne (Joe Flanigan). Something she stumbled across in her Internet search will come up in this conversation.

Alexis will bring up Neil’s wife and daughter, which he apparently once had based on that dedication. General Hospital spoilers say Neil will be quite cagey. He’ll be uncomfortable with Alexis’ questions, so she’ll eventually back off. However, that won’t stop Alexis from being curious about the pain in Neil’s past.

Next, Brad Cooper (Parry Shen) will be in total panic mode. He’ll rely on Julian Jerome (William deVry) to keep him calm and focused. Willow will also need someone to lean on in the week ahead. Michael will see that Willow’s having a rough time, so he’ll step up to support her.

Other General Hospital spoilers state that Harmony will run into trouble. She’ll count on Shiloh to get her out of it, but we’ll see if he’s as loyal to her as Harmony is to him. Elsewhere, Sonny Corinthos (Maurice Benard) will catch Lulu Falconeri (Emme Rylan) on a hot date. He’ll worry that Lulu’s moving on from Dante Falconeri (Dominic Zamprogna), but she’ll just be working on her story for The Invader.

As for Maxie Jones (Kirsten Storms), she’ll intentionally leave Peter August (Wes Ramsey) out of her plans. Maxie may feel like Peter’s going to hinder her mission to track Dante down. Across town, GH fans can expect Josslyn Jacks (Eden McCoy) to need comfort. As Joss struggles, Jasper “Jax” Jacks (Ingo Rademacher) will try everything he can think of to help.

Speaking of help, Drew Cain (Billy Miller) will provide plenty of it while Dr. Kim Nero (Tamara Braun) deals with her loss. He vowed to always be there, so Drew will want to keep his promise. Finally, General Hospital spoilers say some Nelle Benson (Chloe Lanier) shockers are brewing. She’ll make a new pal and escape, so big things are coming up in the baby swap storyline.

Are you eager to see Nelle and all the other action? We’ll give you updates as other GH news comes in. Stay tuned to the ABC soap and don’t forget to check CDL often for the latest General Hospital spoilers, updates and news.