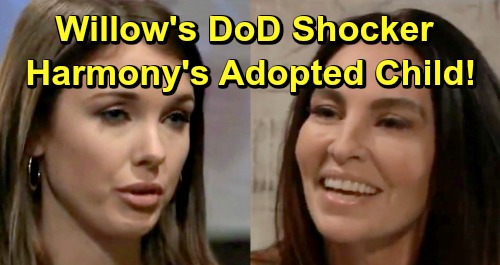 General Hospital (GH) spoilers tease that the truth about Dr. Neil Byrne’s (Joe Flanigan) last patient could unlock a mystery. GH’s newest therapist seems to be well-versed in cult activity. Neil also admits that the last time he tried to save someone from a cult, it didn’t go well. Is Willow Tait (Katelyn MacMullen) the one Neil couldn’t rescue?

If it’s true as we suspect, Madeline Reeves (Donna Mills) wouldn’t have wanted Willow anywhere near her bio family. Someone could’ve noticed the resemblance, so surely her adoptive mother would’ve left the area.

Willow mentioned that her mother moved around a lot when she was young, and they didn’t always have a place to live. We also know Harmony Miller (Inga Cadranel) is determined to get Willow back into Shiloh Archer’s (Coby Ryan McLaughlin) cult. Since Willow previously went by the name Kali Miller, it’s easy to speculate that Harmony raised Willow in the cult after joining it.

Neil told Sonny Corinthos (Maurice Benard) that his last case of exit therapy ended badly. What if Neil’s previous patient was Willow? Perhaps Willow’s adopted father wanted her out of the cult, but Willow refused to break free from DoD and ultimately cut her dad off.

It’s not far-fetched to think Willow’s father was so upset over losing his daughter that he might’ve killed himself. There’s even a chance he was taken out by one of Shiloh’s followers. It’s also possible that Neil was the adopted father, but Willow kept Harmony’s last name after joining DoD.

Willow made it clear that no one could convince her to get out of the cult before she made that decision for herself. She realized she couldn’t be part of brainwashing the kids any longer, especially since she was pregnant with her own. Willow did what she had to do and finally got away from evil Shiloh.

Could Willow have ties to Neil and Harmony? Will Neil bump into Willow and discover that she later left Dawn of Day? Is Neil so against kidnapping because one of his clients tried that and died in the process?