The Bold and the Beautiful Spoilers: 2 Weeks Ahead – Zoe Freaks as Beth Baby Swap Secret Spills

BY Heather Hughes on May 22, 2019 | Comments: one comment
Related : Soap Opera, Spoiler, Television, The Bold and the Beautiful 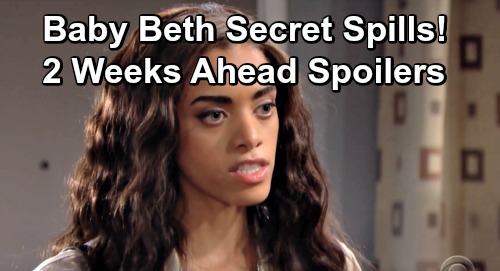 The Bold and the Beautiful (B&B) spoilers tease that one of Zoe Buckingham’s (Kiara Barnes) worst fears will come true. Ever since Florence “Flo” Fulton (Katrina Bowden) decided to stay in Los Angeles, Zoe’s been trying to change her mind. Once Shauna Fulton (Denise Richards) joined the secret circle, that only added to Zoe’s list of worries. They can’t afford for this secret to keep spreading, but that’s exactly what it’s going to do.

It looks like the trouble will start with a simple debate. As Flo’s guilt revs up again, she’ll try to convince Zoe that maybe coming clean is for the best. Flo will plead her case and wonder if Zoe can try to see things her way. The stress of all this is taking a toll on Zoe, so she may be more open to listening. It’s safe to say Zoe would love to end this nightmare if she could.

During the week of May 27-May 31, Flo and Zoe will discuss the advantages and disadvantages of confessing. The benefits include not having to deal with this crushing remorse and overwhelming fear anymore. Hope Spencer (Annika Noelle) would also get Beth Spencer back, which might heal her relationship with Liam Spencer (Scott Clifton).

Nevertheless, the cons far outweigh the pros here. Flo, Zoe, Shauna and Dr. Reese Buckingham (Wayne Brady) could all face legal consequences. Plus, Flo would become loathed in the eyes of her new family. Wyatt Spencer (Darin Brooks) would certainly turn against her as well. Due to Steffy Forrester’s (Jacqueline MacInnes Wood) heartbreak and outrage, Zoe could lose her job.

Zoe could also lose Xander Avant (Adain Bradley), so she’ll stand by her decision to keep this quiet. She’ll just hope she can convince Flo to cooperate. However, everything will change when one more person learns the baby swap shocker. The Bold and the Beautiful spoilers say Zoe will freak when it happens, so someone might overhear her debate with Flo and discover the truth. The aftermath of the exposure will play out during the week of June 3-7.

B&B fans know Xander’s been curious about Zoe’s behavior lately. He can tell something’s bothering her, so he doesn’t understand why she’s refusing to open up. Will Xander be the one to learn the truth? He seems to be the most likely candidate at this point.

Of course, this could put Xander in a precarious position. The Bold and the Beautiful spoilers say some shocking deaths are looming, so Xander could easily be one of them. For now, Xander may keep the secret for the sake of Zoe and her father. He won’t want them to land behind bars, but there are no guarantees Xander will keep his mouth shut forever – unless someone permanently silences him!

It sounds like some fantastic scenes are coming up. We’ll give you updates as other B&B news emerges. Stick with the CBS soap and don’t forget to check CDL often for the latest Bold and the Beautiful spoilers, updates, and news.