The Bold and the Beautiful Spoilers: Baby Swap Reveal DELAYED – See What Will Happen Before Hope’s Reunited With Beth

BY hellodrdavis on May 20, 2019 | Comments: 2 comments
Related : Soap Opera, Spoiler, Television, The Bold and the Beautiful 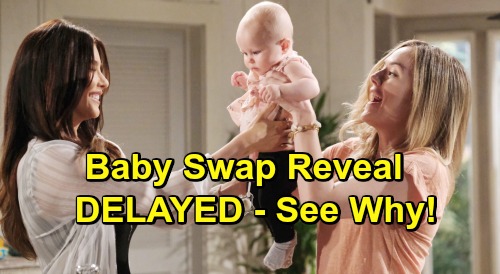 The Bold and the Beautiful spoilers tease that the baby swap storyline isn’t coming to an end anytime soon. In a recent interview with Michael Fairman, B&B Head Writer and Executive Producer Bradley Bell was asked about his future plans for the show, and he offered a few words about what fans can expect down the line.

About the baby swap storyline, Bell said the following: “This is a secret that will be held for a good amount of time…the secrets that are held the longest are the best when they come out.” So, it sounds like there’s certainly going to be lot that happens between now and the day when Hope Spencer (Annika Noelle) finally learns that her beloved daughter Beth Spencer is alive.

In fact, it seems that Hope may be in a very different place in her life when she finally finds out that Beth survived. While it’s impossible know for sure what her landscape will look like once it’s time for the big baby reveal, current B&B spoilers indicate that it will probably occur after some key storyline events unfold.

Hope & Liam Will Be Divorced

First off, Lope will be ending their marriage soon, so it looks like Hope and Liam Spencer (Scott Clifton) will get their daughter back after they’ve split. That could pave the way for an eventual reunion down the road, or some interesting discussions about custody.

Hope’s feelings about Liam being a full-time dad to Kelly Spencer (Zoe Pennington and Chloe Teperman) could change big-time once she and Liam have a daughter of their own to care for. In fact, once Lope get Beth back, there could be some serious tension on Liam resulting from his need to split time between Beth and Kelly, and thus between Hope and Steffy Forrester (Jacqueline MacInnes Wood).

Hope Will Be Closer To Thomas & Douglas

And we can’t forget to factor Thomas Forrester (Matthew Atkinson) and Douglas Forrester (Henry Joseph Samiri) into the picture. B&B spoilers say that Thomas is not going to let up on Hope anytime soon. He will want her to become closer to Douglas, and it looks like he’ll keep up his mission to make that happen.

If Hope does end up romantically involved with Thomas and a close mother-figure to Douglas, and then she finds out that Beth is alive, that could cause some complications there. Hope would obviously want to welcome Beth into her newfound family, and that would cause some big changes for Thomas and especially for Douglas.

Hope Will be Closer To Flo

Now that Florence “Flo” Fulton (Katrina Bowden) knows she’s a Logan, she and Hope are poised to become close friends. Hope already feels a close bond to Flo and has opened up to her

on more than one occasion, and we can probably expect that to continue. Even though Flo will continue to feel tremendous guilt over keeping the baby swap secret, she’ll become a bigger part of Hope’s life.

Of course, that means that Hope is going to feel particularly deceived by Flo when the truth about the baby swap finally does come out. With every day that passes, Flo is making the final reveal worse for herself. Imagine how enraged Hope will be to discover that her cousin knew the truth for months and said nothing just to protect her standing in the family!

Phoebe/Beth Will Be Bonded To Steffy

The more time that goes by before Hope and everyone else learn the truth about Phoebe Forrester (Isabella de Armas and Rosalind Aune) being Beth, the stronger the bond will have grown between Steffy and Beth. At the point when Hope finds out that Beth is alive, the baby will be totally settled in with Steffy and Kelly.

And that means that a simple hand-over of the baby might not be feasible. Of course, all babies are different, and Beth could be one of those babies that bonds strongly to “mom” (in this case, Steffy) and rejects other adults. Hope and Steffy may have to work closely together to make the transition bearable for Beth, and that could be tricky.

Of course, Steffy will also have to deal with the loss of the baby she thought was her daughter. That will be tough for her to cope with, and that could make any transition period particularly challenging for Steffy and Hope to deal with.

It’s going to be interesting to see where Hope’s at in her life when the big baby reveal finally happens, and what circumstances are in place that may make her reunion with Beth challenging. When do you think we’ll see the big baby swap reveal? Stay tuned to the CBS soap and don’t forget to check CDL often for the latest Bold and the Beautiful spoilers, updates, and news.