The Bold and the Beautiful Spoilers: Blind Item Suggests Steffy and Liam Finished – JMW Says No To A Steam Reunion?

BY hellodrdavis on May 19, 2019 | Comments: 2 comments
Related : Soap Opera, Spoiler, Television, The Bold and the Beautiful 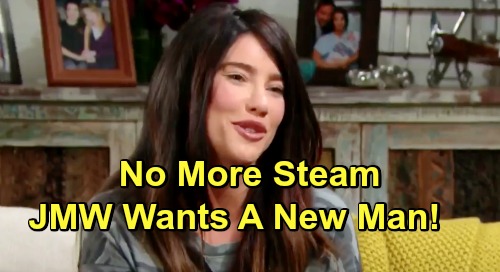 The Bold and the Beautiful spoilers tease that Steffy Forrester (Jacqueline MacInnes Wood) is about to receive some shocking news. She’ll be returning from Paris with the girls in tow on Thursday, May 23, but when she sees Liam Spencer (Scott Clifton), she’ll hear all about his split and impending divorce from Hope Spencer (Annika Noelle).

Steffy’s going to be stunned by the news. She had hoped that by leaving Los Angeles for a few weeks, that would give Liam and Hope time to work on their marriage and repair the damage done by Beth Spencer’s tragic death.

But does the Lope split mean that Steffy and Liam will now be finding their way back to each other? Hope, for one, probably assumes that Liam will immediately go running back to Steffy, Kelly Spencer (Chloe Teperman and Zoe Pennington) and Phoebe Forrester (Isabella de Armas and Rosalind Aune), where she believes he belongs. But is that really going to happen?

If Liam were to get back together with Steffy, it certainly wouldn’t be a clean move. Hope, while she’d be satisfied that Liam would be able to be a full-time dad to the girls, would still have complicated feelings toward Steffy and Steam’s union. And Liam would still love both women, so in some ways the love triangle between Hope, Liam, and Steffy would be continuing.

So, can viewers expect this to happen? It sure doesn’t look that way. And a recent Soap Opera Digest blind item could be speaking to this very issue. Here’s the deal…the SOD blind item states that a leading lady on one of the four daytime soaps shut down her show’s plans for a love triangle. This leading lady wasn’t interested in having her character go down that road, and the show complied.

So, what leads us to say this? Well, for one, Jacqueline’s got a lot of clout now that she’s won the Daytime Emmy For Best Leading Actress. And she’s been pretty vocal in the past about her desire for Steffy to get a new man on the show. She’s made comments in interviews/chats about her character’s need to move on from Liam and for B&B to get “some new blood” for Steffy.

Jacqueline’s even commented about the fan support for a possible pairing with Leo (Sam Myerson) – the handsome executive who asked Steffy on a date a while back. In fact, in a Facebook Live Chat, Steffy said the following about a possible Steffy/Leo pairing: “I wonder if we’ll ever revisit this because I couldn’t believe the amount of people that really liked this Leo.”

So, if the SOD blind item is indeed about Jacqueline and her feelings against her character being embroiled in another love triangle, then that means we won’t be seeing Steffy and Liam pairing up after his split from Hope. And that certainly doesn’t seem to be the direction that the show is heading. Rather, B&B spoilers indicate that Steffy will be shocked by Lope’s split, and that she’ll be supportive of their marriage.

What’s your take on the matter? Do you think that the blind item is about Jacqueline putting the kibosh on another Steffy-Liam-Hope love triangle? Stay tuned to the CBS soap and don’t forget to check CDL often for the latest Bold and the Beautiful spoilers, updates, and news.