The Bold and the Beautiful Spoilers: Darin Brooks & The Young and the Restless’ Kelly Kruger Reveal Terrifying Pregnancy Moments 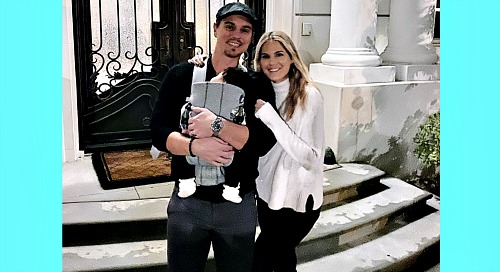 The Bold and the Beautiful (B&B) spoilers has some news to pass on about Darin Brooks, who portrays Wyatt Spencer on the CBS soap. As you probably remember, he and his wife The Young and the Restless star Kelly Kruger (Mackenzie Browning) welcomed baby girl Everleigh Jolie this past September 2019. And ever since, both of the happy parents have been posting adorable pictures of their little girl on social media. She’s a real cutie and is clearly a joy for Darin and Kelly.

Well, the two recently appeared on a segment of Entertainment Tonight, where they shared some details about Kelly’s pregnancy and some scary moments that she had. “At about 14 weeks, I started to have pain that was the most unbearable thing…I was terrified,” Kelly said during the interview.

As it turns out, Kelly Kruger was diagnosed with a fibroid tumor the size of a tennis ball. And after trying to conceive for over a year, then getting pregnant, it was truly terrifying experiencing that level of pain, and they feared the worst for the pregnancy. “It was two weeks of just doubled over in pain, she was in bed and she couldn’t move,” Darin said.

And things didn’t get easier from there. “I ended up gaining 60 pounds during the pregnancy,” Kelly said. “Walking was painful, and my back, and sleeping…” But the good news is that the tumor was degenerating, and months later, little Everleigh ended up coming into the world after a full four days of labor.

And do they want more children down the road? Darin Brooks and Kelly Kruger seemed pretty enthusiastic about the idea of having more children in the future. “We definitely want more,” Kelly says, and Darin wholeheartedly agreed.

The couple also noted that a very special part of Kelly’s pregnancy was that she was pregnant with Everleigh during the filming of her Amazon Prime Christmas movie, “A Very Corgi Christmas.” Darin stated during the Entertainment Tonight interview that it will be wonderful to watch the movie every Christmas season and know that Everleigh “co-starred” in the movie with her mother.

We send our holiday wishes to Darin, Kelly, and little Everleigh as they enjoy their first Christmas together! Stay tuned to B&B and don’t forget to check CDL often for the latest Bold and the Beautiful spoilers, updates, and news.