The Bold and the Beautiful Spoilers: Flo Stunned By Storm Logan Paternity Tie – Will Family Influence Keep Her Out of Jail? 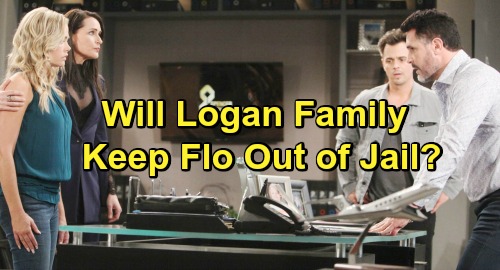 The Bold and the Beautiful spoilers tease that Flo (Katrina Bowden) will be denied happiness due to the paternity reveal that occurs on today’s new episode of B&B, Thursday April 11. Stephen, Junior Logan, known as Storm, (most recently played by William deVry in 2012) is her father.

Normally that would be beautiful news, as the former Miss Fulton said she was Beth’s (Isabella de Armas and Redford Prindiville) birth mother. But not in this soapy instance.

While deVry (currently on General Hospital) last appeared as Storm in 2012, he hasn’t regularly been seen on the show since 2008. Mining a character who’s been gone for many years is a daytime staple, as the backstories of familiar characters, especially on a half-hour show such as B&B, are often lengthened. Doing so also allows direct drama to be instantly obtainable when a new character is invented.

Zoe feels that Flo is nearing a gut-spill, where Hope will be told that Lope’s child never died. The fallout in this part of the linked storyline will have criminal implications for Dr. Buckingham, Flo, and Zoe. So Miss Buckingham may try to convince her dad to come clean, rather than put off the seeming inevitable forever.

Back in Los Angeles, California, the Spencer’s, Quinn (Rena Sofer), and Shauna (Denise Richards) are dealing with Flo’s DNA results. Bill (Don Diamont) is in the clear, which allows Wyatt (Darin Brooks) and his mother to breath a collectively huge sigh of relief.

The Logan paternity confirmation establishes a new set of conflicts for Flo, who entered and remains a conflicted character. As she and the viewers know, the Phoebe reveal awaits.

Jacqueline MacInnes Wood (Steffy) is currently in Europe, which was the plot vehicle that was used to allow Wood to recently deliver her child. All is well with the actor, her husband, and their baby boy, Rise.

Steffy’s return, with Kelly (Zoe Pennington) and Phoebe-Beth, will serve as the next tease to the eventual baby identity reveal. How Flo will be affected remains uncertain, since Bowden is a regular cast member.

That would seem to indicate that Flo won’t be sent to prison for years. So forgiveness and love, after certain levels of emotions erupt and are dealt with, will have to follow at some point, or so one would Hope (pun intended).