The Bold and the Beautiful Spoilers: Friday, March 15 – Thomas & Douglas Return In The Wake Of Caroline’s Death – Bill Feels Guilty

BY hellodrdavis on March 14, 2019 | Comments: one comment
Related : Soap Opera, Spoiler, Television, The Bold and the Beautiful 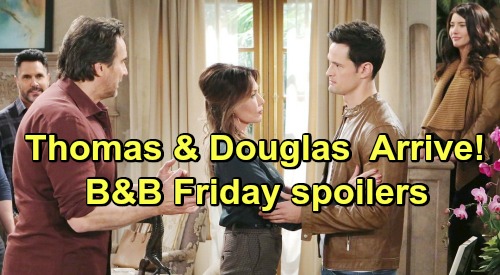 The Bold and the Beautiful spoilers for Friday, March 15, tease that the terrible news of Caroline Spencer’s (Linsey Godfrey) death will rock the Forresters and the Spencers. Taylor Hayes (Hunter Tylo) will be a mess as she relays the news to Steffy Forrester (Jacqueline MacInnes Wood), and Bill Spencer (Don Diamont) will be shaken as he tells Katie Logan (Heather Tom) what’s happened.

Of course, everyone’s first thoughts will be for Thomas Forrester (Matthew Atkinson) and little Douglas Forrester (Henry Joseph Samiri) as they try to process the devastating news. Taylor will be especially distraught that her grandson has lost his mother, and the Forresters and Spencers will soon gather at the Forrester estate to support each other and share their grief.

According to B&B spoilers, the tragedy will send Thomas and Douglas home to rally around their family. Everyone will welcome the two back home, even though it’s under the most difficult of circumstances. It will be viewers’ first glimpse of Matthew Atkinson as Thomas, and the first time we see an aged Douglas, who now appears to be around three or four years old. 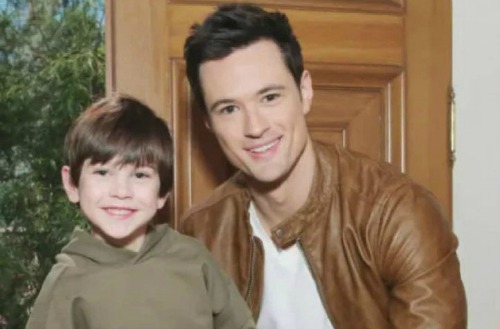 It’s still unclear exactly how Caroline died, but those details will come soon enough on Friday’s new B&B episode, March 15. Viewers will remember that Caroline and Thomas got back together just a few months ago, after Thomas broke up with Sally Spectra (Courtney Hope) for the second time. Sally has held a big grudge against both Thomas and Caroline, so the news of Caroline’s death will likely hit her hard.

According to B&B spoilers, Sally will offer an apology to Thomas, as well as to Douglas, for past mistakes. It seems that in light of the current tragedy, now won’t be a time for holding onto grudges, and Sally will want to make things right with both Thomas and Douglas.

B&B spoilers also indicate that Bill Spencer (Don Diamont) will be feeling particularly glum about what’s happened to Caroline. Recall that at one point, Bill told Thomas that Caroline was dying (which was a lie), in order to get Thomas to reunite with her. It caused all sorts of interpersonal problems for Thomas, Caroline, and Sally, and Bill may be feeling guilty because his stunt ultimately messed with their lives.

Since Bill has recently turned over a new leaf and is the “new and improved” Bill Spencer, he’ll likely feel a good deal of remorse for playing God with Thomas and Caroline’s lives. Of course, Caroline was very upset with Bill after Thomas found out about Bill’s lie, so Bill may be feeling awful about how he left things with Caroline. It will be a bit of his “old Bill” past catching up with him, and he’ll feel terrible.