BY hellodrdavis on November 4, 2019 | Comments: one comment
Related : Soap Opera, Spoiler, Television, The Bold and the Beautiful 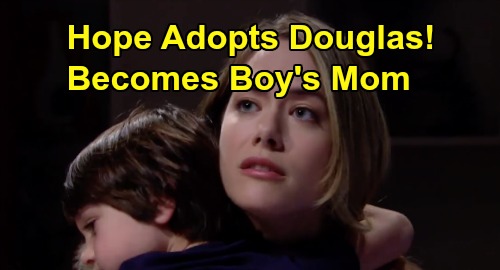 The Bold and the Beautiful (B&B) spoilers tease that Hope Logan (Annika Noelle) will reign victorious. As B&B viewers know, she’s currently got a devious plan in place to get Thomas Forrester (Matthew Atkinson) to allow her to adopt Douglas Forrester (Henry Joseph Samiri). Her plan includes leading Thomas to believe that there’s a chance that they could be together, and that’s pretty risky since Thomas is still obsessed with her.

Of course, Hope really has no intention of ever being with Thomas – she’s just using his feelings for her to get him to sign papers allowing her to have joint custody of Douglas. And as Hope told Brooke Forrester (Katherine Kelly Lang), once she secures joint custody, her plan is to then petition the court for full legal custody of Douglas. It’s a long-range plan, but she’s hoping it will work.

Well, according to B&B spoilers, Hope will indeed be successful and will become Douglas’ mother, so it looks like she’s going to get those adoption papers signed by Thomas. But how exactly this comes about remains to be seen. There are several ways it could go, the first being that Thomas simply gives in and gives Hope what she wants. Sure, he’s asked her to sleep with him, but it’s pretty doubtful that Hope’s going to agree to do that at this point.

Another possibility is that something happens to Thomas, which the weekly B&B preview hints at. There’s B&B buzz that a major character may die, and it’s pretty clear at this point that it’s not Hope or Douglas, so it could be Thomas. The timing of things would have to be just right, though, since Thomas would need to sign the adoption papers before his death in order for Hope to adopt then go forward and adopt Douglas.

But what if there’s another possibility here – that no one dies and that Hope does something super manipulative to get Thomas to sign the papers allowing her to adopt Douglas and get joint custody? The Bold and the Beautiful spoilers says that Hope will frantically search for Douglas at Forrester Creations, which makes it sound like Thomas might do something with Douglas, like hide him. Hope could threaten to turn Thomas in for his actions unless he lets her adopt Douglas.

This latter option may be the most likely, given that Hope will wind up feeling guilty for how she ended things with Thomas. But whatever the case, B&B spoilers indicate that Ridge will find out about Hope’s manipulation of Thomas and he’ll be furious. Something tells us that Hope’s adoption of Douglas will cause a major Forrester/Logan war that will probably be unprecedented.

At any rate, a lot is going to happen within the next few episodes that’s going to change Douglas’ life forever. How do you think that Hope will become Douglas’ mother? Stay tuned to B&B and don’t forget to check CDL often for the latest Bold and the Beautiful spoilers, updates, and news.