The Bold and the Beautiful Spoilers: Liam Overhears Thomas Threat – Discovers Flo’s a Fraud and Steffy’s Adoption of Phoebe Fake 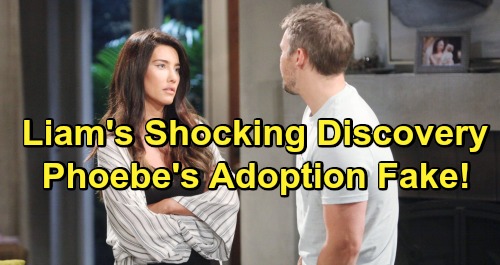 The Bold and the Beautiful spoilers tease that Liam Spencer (Scott Clifton) will soon overhear something interesting. As B&B viewers know, Liam is quite suspicious of Thomas Forrester (Matthew Atkinson). He has a sneaking suspicion that Thomas is up to no good when it comes to Hope Logan (Annika Noelle), but he just can’t put his finger on the root of the issue.

Well, as B&B viewers know, Thomas indeed has a sinister plan. He knows that Hope and Liam’s daughter Beth Spencer is alive and living in Steffy Forrester’s (Jacqueline MacInnes Wood) home as Phoebe Forrester (River Davidson and Madeline Valdez). And he’s content to let that situation go on forever, so long as he can get Hope all to himself. It’s totally devious.

But according to B&B spoilers, Liam will soon overhear a conversation not meant for him. It appears that Thomas and Florence “Flo” Fulton (Katrina Bowden) will have another argument about the Beth secret – which Flo also knows. The Bold and the Beautiful spoilers say that Flo will get tipsy at Thomas and Hope’s wedding, so Liam will overhear a drunken Flo and Thomas arguing about the secret – followed by a threat from Thomas.

Whatever the case, it doesn’t look like Liam will hear enough details to realize that Beth is alive or exactly what the big secret involves, but he’ll hear something about “a secret” and a threat that will get him curious.

Of course, if Liam’s smart, he’ll avoid confronting Thomas about the secret for the time being. Sure, he’ll probably want to go in with guns blazing and demand that Thomas divulge whatever “the secret” is, but that’s probably not the best way to go about getting at the truth. Thomas is a keen manipulator and he’s not likely to give up anything even if Liam pushes and starts making threats. Liam would be much better off to investigate the secret quietly, outside of Thomas’ awareness which is what he will do.

Will Liam Stumble Upon Beth Secret?

Flo has definitely proven herself to be a weak link where the Beth secret is concerned, as she routinely gets strong guilt pangs and wants to come clean. If Liam were to corner Flo in one of her weak moments, he might just learn the truth about Beth!

Liam desperately wants proof that Thomas is a bad guy so he can convince Hope to leave Thomas, but in trying to do so he might just stumble across the existence of his own daughter.

The Bold and the Beautiful spoilers tease that, as CDL has reported, the “secret” that Liam will stumble upon comes after he examines Steffy’s adoption papers. All heck will break loose after Liam calls the Las Vegas hospital where Flo gave birth to ‘Phoebe’ and learns she never had a baby at the hospital nor was she ever registered there as a patient!

What do you think will happen after Liam learns that Flo is a fraud and never gave birth to Phoebe at the hospital named in Steffy’s adoption papers? There will be no way to avoid the conclusion that Steffy’s adoption of Phoebe is fake and not legal! Stay tuned to the CBS soap and don’t forget to check CDL often for the latest Bold and the Beautiful spoilers, updates, and news.