The Bold and the Beautiful Spoilers: Spectra Deal Brings Wyatt and Sally Closer – But Will Thomas Break Them Up?

BY hellodrdavis on February 18, 2019 | Comments: one comment
Related : Soap Opera, Spoiler, Television, The Bold and the Beautiful 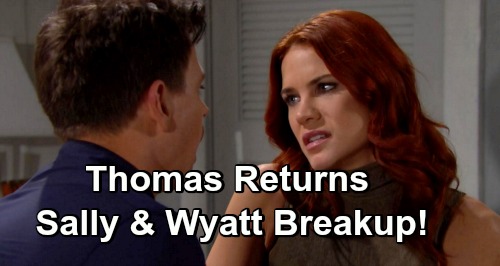 The Bold and the Beautiful spoilers tease that Wyatt Spencer (Darin Brooks) and Sally Spectra (Courtney Hope) are truly enjoying their romance. The two spend a considerable amount of time together, both at home and working at Forrester Creations. But they’ll soon get a big boost that will push their relationship to a new level.

According to B&B spoilers, Bill Spencer (Don Diamont) will make Wyatt a very lucrative offer. He’ll want Wyatt to come back to work with him at Spencer Publications. Of course, this would be a big move for Wyatt, because he previously left Spencer on bad terms. But Wyatt always had it in the back of his mind to possibly return to Spencer one day, so he’ll seriously consider the offer.

But Wyatt will want a bit more from his dad than Bill was originally willing to give. Wyatt will want to look out for Sally and her career interests as well, and he knows that there’s nothing that Sally wants more than to get Spectra Fashions back up and running. Sally’s a great designer for Forrester, but her real passion is running a fashion house.

So Wyatt will agree to return to Forrester as long as Bill revives Spectra Fashions, and Bill will reluctantly agree. It will be a wonderful present to Sally, and she’ll be thrilled. It will also bring Wyatt and Sally closer together, and there’s B&B buzz that Wyatt may be getting close to popping the big question to Sally.

But this is B&B, and couples can’t be too happy for too long, so there’s bound to be a wrinkle in Wally’s romance at some point. And it looks like that wrinkle might be coming in the form of Thomas Forrester’s (Matthew Atkinson) return. Thomas and Sally were an item on more than one occasion, but their most recent pairing ended in drama when Thomas left Sally for Caroline Spencer (Linsey Godfrey) for the second time.

But with Thomas coming back onto the scene, Wyatt and Sally may have to deal with some issues. Sally will certainly still have some unresolved anger with Thomas for what he did, and this could interfere with Wally’s carefree joy. And if Thomas goes back to work at Forrester, then he will be in direct competition with Spectra Fashions, which could lead to tension.

Whatever happens, it looks like Thomas’ return may shake up Wyatt and Sally a bit. Do you think that he will pose a threat to Wally’s relationship? Stay tuned to the CBS soap and don’t forget to check CDL often for the latest Bold and the Beautiful spoilers, updates, and news.