The Bold and the Beautiful Spoilers: Thomas’ Brain Tumor Redemption – Can Shocking Diagnosis Save the Character? 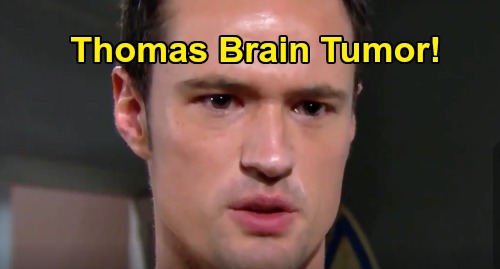 The Bold and the Beautiful (B&B) spoilers reveal that it’s time to start thinking about Thomas Forrester’s (Matthew Atkinson) future. B&B has written Thomas into a dark corner, so they can do one of two things: redeem him or write him out. Thomas still has scenes coming up in October, so the latter doesn’t seem to be the way things are going at this point.

It’s possible B&B will write Thomas out eventually. After all, there are always cast shakeups happening in the soap world. However, the plan right now seems to be redemption. Let’s consider a few clues about what’s ahead for Thomas.

For starters, The Bold and the Beautiful spoilers say Thomas will pay the price for his out-of-control behavior. Brooke Forrester (Katherine Kelly Lang) will step up to protect Hope Forrester (Annika Noelle) soon, which will lead to some shockers. It appears Thomas will be severely injured and hospitalized due to Brooke’s actions.

There’s a good chance Thomas will land in a coma. Anyone who’s watched soaps for a while will tell you that suffering is an essential part of redemption. If someone hurts characters we care about, the hurtful character must hurt in return. Other characters have to find sympathy in their hearts somehow and so do fans. That doesn’t mean it works for all viewers, but it’s helpful if you can win over some.

In this case, a coma could lead to the discovery of a brain tumor. There are some hints that suggest the story’s leaning that way. Thomas’ behavior has grown progressively worse as the weeks have gone by. It’s almost like a tumor is growing, isn’t it? Thomas just keeps sinking lower and lower, so there may be a reason for that.

We also have to consider Thomas’ treatment of Douglas Forrester (Henry Joseph Samiri). Child abuse is a serious thing that fans really don’t want to see. Thomas treats this little boy like garbage; Douglas is basically just a pawn in Thomas’ game. Even Vincent “Vinny” Walker (Joe LoCicero) was surprised by the derogatory comments Thomas made about his own kid.

B&B is a crossing a line for some viewers that can only be fixed by a solid medical excuse, and a brain tumor is an easy fix. Plus, Vinny’s remarks back that up. He knows Thomas quite well and has noticed the shift from a calm strategist to a hot mess! Thomas himself even mentioned that he felt like his brain was on fire, which is perhaps the most crucial evidence of all.