BY Heather Hughes on August 21, 2019 | Comments: one comment
Related : Soap Opera, Spoiler, Television, The Bold and the Beautiful 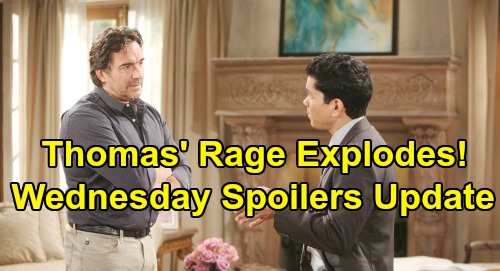 The Bold and the Beautiful (B&B) spoilers update for Wednesday, August 21, tease that Thomas Forrester (Matthew Atkinson) will get some horrible news – at least it’ll be horrible him! Hope Forrester (Annika Noelle), on the other hand, thinks this is an excellent decision. She’s getting an annulment from Thomas, so she’ll want to let her soon-to-be former husband know.

Over the phone, Hope will insist their marriage is over. She’ll make it clear that she can’t put Thomas behind her fast enough. After how far Thomas went to hide the truth about Beth Spencer (River Davidson and Madeline Valdez), Hope doesn’t even want to look at him. She’ll certainly doesn’t want to be married to a man who would hurt her like that, especially one she never loved to begin with.

Liam Spencer (Scott Clifton) is and always was the man Hope wanted. However, he’ll grow increasingly fearful after Hope and Thomas’ phone call. It’ll be easy to see how much rage Thomas has built up. Sooner or later, that rage has to explode – and Hope could be the target when it happens.

Liam will warn Hope about the serious threat Thomas poses, but she just won’t be as concerned as he is. Hope felt like a weakling for months due to her grief and all the manipulation she fell prey to. She’ll refuse to let Thomas rob a second more of her time through his intimidation tactics. Hope’s moving on whether Thomas likes it or not.

Of course, Brooke Forrester (Katherine Kelly Lang) will be on the same page with Liam this Wednesday. The Bold and the Beautiful spoilers say they’ll have a meeting to discuss the risks. Liam and Brooke will agree that as long as Thomas is in hiding, the threat will always be out there somewhere. They’ll hate the idea of Hope facing Thomas’ sneak attack.

Unfortunately, Thomas will indeed plot one of those after he hangs up with Hope. He’ll become determined to get Hope alone and explain why they belong together. B&B fans can expect this scheme to go awry by the end of the week. The consequences should be brutal for Thomas, so don’t miss all the action.