BY Heather Hughes on January 17, 2019 | Comments: one comment
Related : Soap Opera, Spoiler, Television, The Bold and the Beautiful 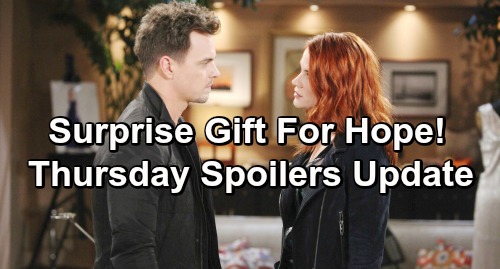 The Bold and the Beautiful (B&B) spoilers for Thursday, January 17, tease that Hope Spencer (Annika Noelle) will remain in a dark place, but Wyatt Spencer (Darin Brooks) and Sally Spectra (Courtney Hope) could make her world a little brighter. Nothing can stop the pain Hope and Liam Spencer (Scott Clifton) are dealing with, but they’ll get a hint of happiness thanks to a gift.

Sally and Wyatt will pay “Lope” a visit at the cabin on Thursday. They’ll bring a special guest with them in hopes of lifting Liam and Hope’s spirits. Hope is feeling particularly distraught right now. Losing Beth Spencer hit Liam hard, but Hope is just completely shattered.

She may benefit the most from Wyatt and Sally’s special pal. They’ll bring along a cute puppy to serve as a distraction from grief.

An eight-week-old Chihuahua mix named Oscar will pop up for some adorable scenes. B&B got this pup from the South Bay Adoption Center, so this rescue dog will be a star for a day. Perhaps Oscar will steal Hope’s heart, even if it’s just for a few minutes.

Once Hope’s done cuddling with this puppy, she’ll turn her attention to Wyatt. He’ll want to support Hope, so he’ll certainly be willing to talk and listen.

The Bold and the Beautiful spoilers say Hope and Wyatt will mull over their history together. Beth isn’t the only baby Hope’s lost. She also had a miscarriage when she was pregnant with Wyatt’s child. That loss was also a dark time in Hope’s life and Wyatt knows exactly what she went through. They may discuss how they put one front of the other and found a way to move on.

Unfortunately, letting go of Beth will be tougher. Hope almost had the dream family she wanted, but she came home with a broken heart instead of a bundle joy. Wyatt may not know how to help, but just being there for Hope will be enough. He can’t get rid of her sorrow, but it’ll be good for Hope to know she’s got people in her corner.

Other Bold and the Beautiful spoilers say Katie Forrester (Heather Tom) will like Bill Spencer’s (Don Diamont) transformation. She’ll be pleased that Bill’s keeping his promises and sticking with the changes he’s made.

Bill and Will Spencer (Finnegan George) are closer than ever, so Katie will want to build on that bond. She’ll do her best to talk Thorne Forrester (Ingo Rademacher) into a family dinner.

Thorne won’t be thrilled about the idea, but Katie will want to put Will first. She’ll think it’d be great for Will to sit down with his dad, mom and stepdad. Katie will view them all as important parts of Will’s life, but it won’t be long until Thorne’s feeling like an outsider. He’ll agree to share a meal together, but jealousy won’t exactly make this fun for him.

It looks like another hot episode’s coming up. We’ll give you updates as B&B news emerges. Stay tuned to the CBS soap and don’t forget to check CDL often for the latest Bold and the Beautiful spoilers, updates and news.