The Bold and the Beautiful Spoilers: Wyatt Blasts Liam For Focusing On Steffy and Kelly After Beth Death, Neglecting Hope

BY Kinsley Goldman on January 16, 2019 | Comments: one comment
Related : Soap Opera, Spoiler, Television, The Bold and the Beautiful 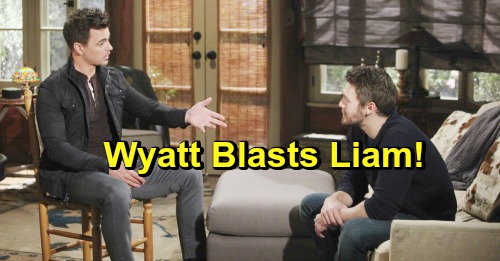 The Bold and the Beautiful (B&B) spoilers tease that Sally Spectra (Courtney Hope) and Wyatt Spencer (Darin Brooks) will want to help. They’ll come up with a way to lift Hope Spencer’s (Annika Noelle) spirits and give it a shot later this week on Thursday’s new B&B episode, January 17.

It looks like they’ll think Hope could use a friend of the canine variety. An adorable dog will pop up for some cute scenes, but it probably won’t help much. Hope is overwhelmed by all her grief and doesn’t see any light at the end of the tunnel.

Liam Spencer (Scott Clifton) is drowning in grief of his own and just doesn’t know how to help his wife. However, it seems Wyatt may think that needs to change. After an emotional chat with Hope, Wyatt will reach a conclusion and seek Liam out for another important conversation.

The Bold and the Beautiful spoilers say Wyatt will deliver a stern warning to his brother. He may realize that Hope’s in bad shape and could really spin out if she doesn’t get the proper support.

Wyatt can certainly offer that, but not like her husband can. Liam went through this loss with Hope, so he can support her in a way that others can’t. Only Liam and Hope know what it was like to lose Beth Spencer.

Wyatt will undoubtedly be sympathetic to what Liam’s dealing with, but he may want to be clear about the facts, too. The truth is Hope needs Liam right now. He can’t be spending all his time with Steffy Forrester (Jacqueline MacInnes Wood) and Kelly Spencer if he wants to help Hope heal.

Wyatt may push Liam to focus on his marriage and help Hope through her struggles. He might think his brother has to step up or else things could get ugly. Who knows how far Hope could sink? Could Wyatt be worried about Hope taking her own life?

She’s awfully depressed and that’ll probably get worse before it gets better. Brooke Forrester (Katherine Kelly Lang) will continue her efforts to be there for her daughter, but it may not be enough.

Will Liam heed Wyatt’s warning and concentrate on Hope? Will he let himself get caught up in his own mourning instead? B&B spoilers say Liam and Hope’s relationship will be tested in the months ahead. That’s especially true since Steffy’s about to adopt their baby! They won’t know that it’s Beth, but just seeing Steffy with a new little one will definitely be rough.