The Bold and the Beautiful Spoilers: Thursday, May 23 – Steffy Returns To Shocking Lope Divorce News – Liam Reunites With The Girls

BY hellodrdavis on May 22, 2019 | Comments: 2 comments
Related : Soap Opera, Spoiler, Television, The Bold and the Beautiful 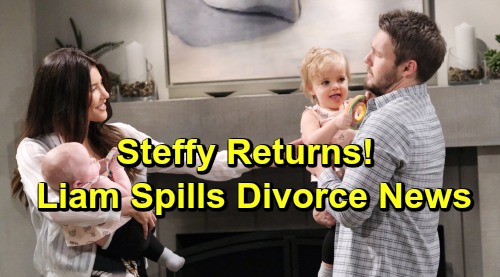 The Bold and the Beautiful spoilers for Thursday, May 23, tease that Steffy Forrester (Jacqueline MacInnes Wood) will return to her home in Los Angeles. Of course, Steffy has been away in Paris with Kelly Spencer (Chloe Teperman and Zoe Pennington) and Phoebe Forrester (Madeline Valdez), but the three will be back in a big way. They’ll all be glad to be back home and Steffy will work to get them all settled back in.

But Steffy will get a big shock when Liam Spencer (Scott Clifton) shows up to welcome them all back home. Of course, he’ll be happy to see them, and they’ll surely have a nice reunion, but soon talk between Steffy and Liam will turn to Hope Spencer (Annika Noelle). As B&B viewers know, Hope and Liam just ended their marriage. Liam is heartbroken, and he’ll sadly share the news with Steffy.

Meanwhile, on the new episode of B&B on Thursday, May 23, word of Liam and Hope’s split will spread. Hope will tell Brooke Forrester (Katherine Kelly Lang) about what’s happened. Brooke will be astounded, but Hope will insist that she is the one who ended her marriage. Hope will explain that she feels strongly that the children must come first.

She’ll tell her mother that she has insisted that Kelly, Phoebe, and Douglas Forrester (Henry Joseph Samiri) come first in the equation, and that while she loves Liam and always has, they must end their marriage and put the children first. Brooke will probably wonder is Thomas Forrester (Matthew Atkinson) has meddled and caused this situation, but Hope will probably assure her mother that it was all her decision.

Of course, B&B viewers know that this really isn’t true. After all, Thomas produced a phony and forged letter that he claimed was from Caroline Spencer (Linsey Godfrey) and that played on Hope’s feelings toward Douglas. But Hope honestly believes that she came to the decision on her own, and she won’t back down.

Thomas will also have news to share. He’ll talk with Ridge Forrester (Thorsten Kaye) about Hope’s decision to be there always for Douglas. Ridge will likely worry about Thomas’ influence over Hope and the growing relationship between them. The Bold and the Beautiful spoilers say that Ridge will counsel Thomas to leave other people’s relationships alone, but it seems a bit too late for that talk.

At any rate, Brooke and Ridge will each take major parenting roles on Thursday’s episode, as Brooke tries to comfort her daughter during this sad time and Ridge tries to persuade his son not to do further damage to other people’s relationships.