BY Heather Hughes on February 19, 2019 | Comments: one comment
Related : Soap Opera, Spoiler, Television, The Bold and the Beautiful 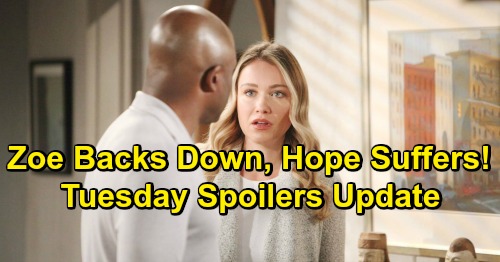 The Bold and the Beautiful (B&B) spoilers for Tuesday, February 19, tease that Zoe Buckingham (Kiara Barnes) will be ready to blab. She just showed up to tell Steffy Forrester (Jacqueline MacInnes Wood) the truth about Hope Spencer’s (Annika Noelle) baby, but it appears that plan won’t pan out. Dr. Reese Buckingham’s (Wayne Brady) warning will undoubtedly weigh on Zoe as she prepares to confess.

Zoe knows that if she goes through with this, Reese will likely go to prison along with Florence “Flo” Fulton). Although Zoe has a complicated relationship with her dad, she truly loves him. The fact that Reese was protecting her didn’t matter much initially, but it may bring guilt soon enough. Zoe will hate the idea of being the reason Reese is punished.

The Bold and the Beautiful spoilers say Reese and Flo will have a major freak-out on Tuesday. They’ll realize Zoe could blow their whole scheme, so they’ll wonder what they can do about it. Reese may try frantically to get in touch with Zoe. He might think he can get through to his daughter if he speaks with her just once more.

Whether Reese succeeds or not, it seems Zoe will have a change of heart. She will find a way to cover up what she’s said so far and hopefully throw Steffy off the trail. Bottom line is that Hope will be suffering and childless while Steffy enjoys raising her stolen baby.

B&B fans know Bill hasn’t exactly treated Wyatt or anyone else right in the past. He’s always looking out for number one, so Wyatt won’t have high hopes about this new-and-improved version of his father. There’s certainly a chance Bill will revert to his old behavior and cause more pain.

Wyatt will have to decide if he wants to get sucked back into Bill’s world and risk setting himself up for more drama. However, he’ll sense that he could score a serious advantage for Sally Spectra (Courtney Hope) out of this. Wyatt will call for Spectra Fashions’ revival and make an official deal later this week.