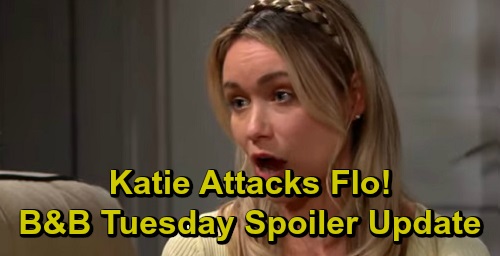 The Bold and the Beautiful (B&B) spoilers update for Tuesday, September 17, tease that Florence “Flo” Fulton (Katrina Bowden) will get an earful from Katie Logan (Heather Tom). B&B fans know Flo played a crucial role in the baby swap plot, which left lives shattered by pain and betrayal. To make matters worse, Flo just scored an immunity deal and won’t have to pay for her crimes.

None of that will fly with Katie, who’ll be ready to unleash her wrath. She’ll realize Flo’s looking for redemption, but she just won’t think it’s possible. Katie will insist Flo isn’t welcome around the Logan family anymore. She’ll make it clear that Flo will never regain their trust or be accepted, but the exiled Logan won’t give up hope. Flo will desperately want to undo some of the damage and find peace.

Nevertheless, Katie will think the fake birth mom is a lost cause. She won’t get why Flo’s hanging around town instead of making the most of her fresh start. Katie will contend that Flo should leave Los Angeles and go somewhere else – perhaps somewhere where they haven’t seen Flo’s true colors!

The truth is Katie won’t care what Flo does as long as she stays far, far away from her victims. Katie won’t want Flo causing any more trouble. Unfortunately, this attack on Flo may not be good for Katie’s heart. The Bold and the Beautiful spoilers say tragedy will hit for Katie and Bill Spencer (Don Diamont) soon. It sounds like Katie’s heart issues will flare up and lead to her shocking collapse next week.

In the meantime, Ridge Forrester (Thorsten Kaye) will return home following his drunken night with Shauna Fulton (Denise Richards). They thankfully didn’t hook up, but they still felt a pact was necessary. Ridge’s marriage is already stuck in turmoil, so he fears Brooke Forrester (Katherine Kelly Lang) couldn’t handle news like this. He’d be better off confessing and offering a reasonable explanation, but B&B characters tend to make bad choices.

Instead, it seems Ridge will provide a Shauna-free version of events. Brooke will grill him about his night out, but he’ll make sure he dances around the real story. That’ll bring major drama when Brooke inevitably finds out anyway. It’ll look like Ridge had something steamy to hide!

As for Shauna, she won’t exactly be a sealed vault. Flo knows her mom awfully well, so she’ll be able to tell something isn’t right. When pressed, Shauna will likely admit what happened with Ridge – which wasn’t very much.

Even so, Shauna will come clean about her growing feelings for the rugged Forrester. The Bold and the Beautiful spoilers say she’ll definitely freak Flo out later this week. We’ll give you updates as other B&B details emerge. Stay tuned to the CBS soap and don’t forget to check CDL often for the latest Bold and the Beautiful spoilers, updates and news.