The Young and the Restless Spoilers: Adam Newman Seen In Genoa City During May Sweeps – Chelsea and Connor On The Way? 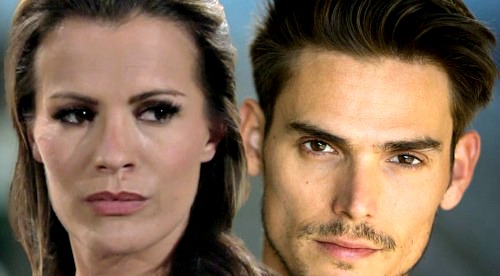 The Young and the Restless spoilers tease that the newly recast Adam Newman (Mark Grossman) could debut during May Sweeps. Soap operas record approximately six weeks in advance, which does allow for this projected time frame to be on target.

The last time viewers saw Adam, he was embodied by Justin Hartley. That actor’s two-year run (2014-2016) was applauded by a wide swath of Y&R’s hardcore audience, which was quite an impressive accomplishment considering who he replaced.

Devoted viewers know that Michael Muhney’s five year reign (2009-2014) was cheered, until he was stunningly let go from the cast in December 2013 by former executive producer Jill Farren Phelps. Muhney did interview for rehire in the summer of 2014, which proved that he was eligible to return. That was an important moment as it followed rampant speculation. Y&R signaled to the entertainment world that its cast decision was not related to anything untoward.

Muhney’s subsequent public statements, regarding his hopes to return to the cast, didn’t result in him being rehired during the past five years. With whatever Y&R’s choice this time, it is best for all fans of Muhney, who also support this soap opera, to wish both the actor and the show well. Supporting both is a balanced choice.

Yes, Grossman’s hire won’t be as electric of a (re)entrance as Muhney’s would have been. But like Hartley before him, Grossman has earned his chance. All light-hearted Y&R fans are willing, as they’ve always been, to see how any new cast member performs and then form a conclusion after an adequate amount of time has passed, which could be weeks, months, a year, or more.

Of course the success of any recast is tied to whatever storyline that actor’s character is given to play. In Adam’s case, fans will need to learn how he survived the September 2016 cabin blast that Chloe (Elizabeth Hendrickson) caused. Viewers will also want to know what Adam has been doing for the past two-plus years.

Chelsea’s (Melissa Claire Egan) sudden departure, with Connor (Gunner and Ryder Gadbois), last year could have been because she was meeting Adam, or has since. Grossman’s alter ego surely needs to be, or will be with his wife and son, right?

Yes, a Chadam reunion makes sense. If that doesn’t happen immediately, then it should take place after Adam Newman is seen again in Genoa City, which could be as soon as during May Sweeps.