The Young and the Restless Spoilers: Adam Pulls Chelsea Back In, Chadam Too Strong – New Life and Marriage Collapse?

BY Sean O'Brien on June 1, 2019 | Comments: one comment
Related : Soap Opera, Spoiler, Television, The Young and the Restless 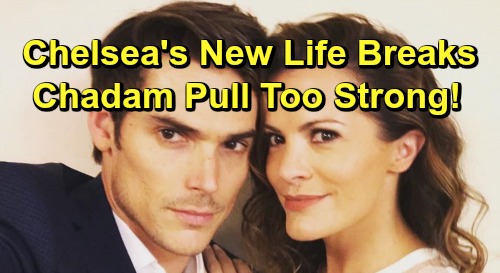 The Young and the Restless spoilers tease that Genoa City life will increasingly focus on Adam Newman (Mark Grossman). Y&R fans felt the plot would strongly shift in this direction the moment this long-awaited recast character was found alive and it has.

Mentions of Chelsea Lawson Newman (Melissa Claire Egan) have happened in recent weeks. That, along with Egan’s known return to the cast, imply that Adam’s wife will soon be seen on screen.

Following contact with Sharon, Chelsea’s sure to return to GC. Of course Adam will be in for terrible news on Monday’s new Y&R episode, June 3, when he learns that Chelsea has moved on with a new husband who has adopted Connor Newman (Gunner and Ryder Gadbois).

Learning that her beloved ex-husband never died will be a shock to Chelsea, and she will tell Sharon that she has closed the door on that chapter of her life. But this is The Young and the Restless… with a resulting emotional ChAdam reunion certainly in order. Surely, Connor will also be overjoyed to see his real father again as well.

When last we saw her, Chelsea believed that Chloe Mitchell (Elizabeth Hendrickson) had also died. That ruse was okay’d by Victor Newman (Eric Braeden), who took surprising, yet genuine pity on Bella Mitchell (Cali May Kinder).

The Moustache didn’t want to see Khloe’s little girl be without her mother as Connor was without his father. So despite Chloe’s various revenge acts against Adam, which even included the seemingly successful cabin blast, she, Bella, and Kevin Fisher (Greg Rikaart) were allowed to go live out west.

Adam’s realization that Chloe is also, like him, undead, will establish a terrific build-in to what could be an epic face-off climax. He, believed by Chloe to be the accidental killer of her first-born daughter, Delia Abbott (Sophie Pollono), in October 2013. She, known by Adam to have shot him with a sedative dart and then to have tried to kill him by rupturing a gas line at the cabin in September 2016.

Daytime drama revs high when well-established characters sport hard grudges against a full-on rival. Adam and Chloe were and may again be out to get each other, or at least that’s what can be projected. Though great soap is never what it’s expected to be.

Here’s hoping that Y&R writes at least one mega twist into the next chapter of the Adam-Chloe battle. Viewers know where they’ve been and why. Now, fans are hoping for something that rings true to both characters, but is also plays fresh.

Well well well, what do we have here… #chadam #yr @missyclaireegan