The Young and the Restless Spoilers: Angry Dina Lashes Out at Abbott Abandoners – Feels Family Wants Rid of Her

BY Heather Hughes on May 25, 2019 | Comments: one comment
Related : Soap Opera, Spoiler, Television, The Young and the Restless 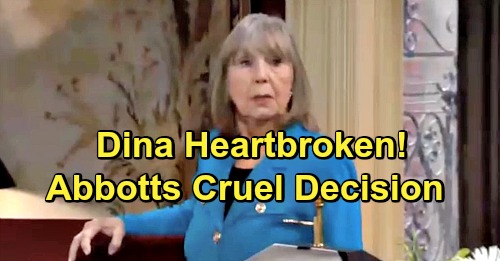 The Young and the Restless (Y&R) spoilers tease that some heartbreaking Abbott drama is coming up. Y&R fans know Dina Mergeron (Marla Adams) has been steadily declining. She’s becoming more and more confused, which is leading to outbursts and moments where she’s tough to handle.

Jack Abbott (Peter Bergman) missed out on so much time with his mother, so he wanted to keep her at home for as long as possible. He wishes Dina could’ve remained there until her final days. However, Jack also has to think about what’s truly best for Dina. Safety needs to be the priority here.

Dina could hurt herself or one of the Abbotts if they don’t take action now. She needs to be placed somewhere with round-the-clock care and a stable, comforting environment. There are people better equipped to deal with Dina’s condition, so Jack and Traci Abbott (Beth Maitland) have decided to let go.

After Ashley Abbott (Eileen Davidson) arrives during the week of May 27-31, she’ll join Jack, Traci and Abby Newman (Melissa Ordway) for hard conversation. Hurting Dina is the last thing any of them wants to do, but they can’t leave her in the dark. They’ll realize they need to come clean about the move and prepare Dina for what’s ahead.

Ashley will admit this is going to be the most difficult part. She’ll think they need a plan to break it to her gently, but Dina already knows she’s headed to a facility. She overheard the news and certainly won’t be happy about it. The Young and the Restless spoilers say Dina will reveal her hidden knowledge. She’ll be crushed that the Abbotts are banding together to ship her off.

Dina will feel like she’s become too much of a burden, so they just want rid of her. She may even bring up her past mistakes and suggest that this is some form of payback. Of course, that’s not the case at all. Ashley and the others will do whatever they can to help Dina not feel abandoned. They won’t want her thinking they don’t love her anymore. In fact, love is what’s motivating this excruciating decision.

Will Dina ultimately understand why it’s time to leave the Abbott estate? Could checking out a new facility help? The Young and the Restless spoilers say the transition will be tricky, but the Abbott family will try to stay strong. We’ll give you updates as other Y&R details emerge. Stick with the CBS soap and don’t forget to check CDL often for the latest Young and the Restless spoilers, updates, and news.