The Young and the Restless Spoilers: Baby’s Paternity Causes Mia’s Ultimate Downfall – Who Busts Her For Lola’s Attack Revealed

BY hellodrdavis on April 14, 2019 | Comments: one comment
Related : Soap Opera, Spoiler, Television, The Young and the Restless 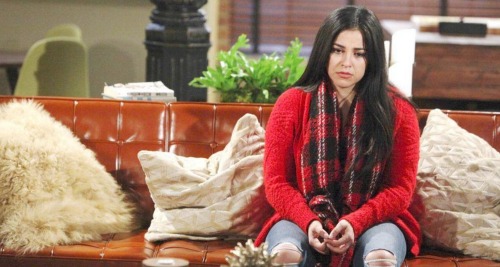 The Young and the Restless spoilers tease that Mia Rosales’ (Noemi Gonzalez) exit is looming. As viewers know, Noemi Gonzalez has recently announced that she’s leaving Y&R. She’ll be on canvas for about another month yet, and it should be an exciting departure storyline for the character. Of course, Mia is currently embroiled in some serious drama.

Rey Rosales (Jordi Vilasuso) knows that Mia is responsible for his sister Lola Rosales’ (Sasha Calle) brutal attack. Mia thought she was attacking Abby Newman (Melissa Ordway), but since Lola was wearing Abby’s coat, Lola got tagged instead. And since Mia’s pregnant, Rey was willing to protect her and prevent her from having her baby in jail.

Of course, the situation has become a bit more complicated now that Mia and Rey are divorcing. Rey no longer knows whether Mia’s baby belongs to him or to Arturo Rosales (Jason Canela), and Rey’s involved in a new relationship with Sharon Newman (Sharon Case). It’s a real mess, but it certainly looks like Mia will eventually be revealed as Lola’s attacker.

And that gets us wondering exactly who will be the one to reveal Mia as the attacker. As it stands, there seem to be four people who could totally bust Mia and potentially send her to prison for her violent attack on Lola.

First on the list is Rey. Rey’s been willing to protect Mia ever since he discovered that Mia was Lola’s attacker, but that was because (a) she was his wife, and (b) she was pregnant with his baby. But oh, how things have changed. Rey and Mia are now kaput, but of course she’s still pregnant. But if a paternity test is done and it turns out that Rey is not the baby’s father, then he could very well find a way to turn her in for her crime.

Rey would have to be careful not to implicate himself in the process, since he’s guilty of covering up her crime. He outright lied to Paul Williams (Doug Davidson) about her guilt, but Rey’s pretty clever and he could pretend to suddenly find her earring that matches the one found at the scene of Lola’s attack.

Another person who could easily bust Mia is Paul. Paul is currently pretending to let Rey handle the investigation into Lola’s attack, but he suspects that Rey knows more than he’s letting on. Paul’s pretty sharp, and he may already suspect that Mia could be the one. After all, who else would Rey protect? And if Paul busts Mia, then Rey will probably go down for obstruction, too.

Next, there’s Sharon. According to Y&R spoilers, Rey will fill Sharon in on what Mia did to Lola and on the fact that he covered up the crime due to Mia’s pregnancy. Of course, there’s no love lost between Sharon and Mia, and if Sharon turned Mia in for the attack, then she’d be effectively ridding herself and Rey of a major complication.

The only problem here would be that Mia could be pregnant with Rey’s child, and Sharon would likely have great compassion for the baby. But if a paternity test is done and Rey turns out not to be the baby’s father, then Sharon might just go ahead and find a way to turn Mia in.

It’s fair to say that Arturo is not Mia’s biggest fan right now. Although he is partly responsible for his affair with Mia that led to his breakup from Abby, he still resents Mia big time. He’s really got a love/hate relationship with Mia, and while he’s sometimes drawn to her, at other times he’s completely repelled by her.

Arturo could decide that he’s had enough of Mia and wants her out of his life and his family’s life for good. According to Y&R spoilers, Mia is going to want Arturo to give her an alibi for the night of Lola’s attack. He might outright refuse, or he could go ahead and turn her in once he finds out what she did…especially if it turns out that Mia’s baby is not his.

Who do you think will eventually bust Mia for what she did to Lola? Stay tuned to the CBS soap and don’t forget to check CDL often for the latest Young and the Restless spoilers, updates, and news.