The Young and the Restless Spoilers: Billy & Victoria Investigate Victor – The Moustache Has a Lead On Adam Newman?

BY hellodrdavis on April 8, 2019 | Comments: one comment
Related : Soap Opera, Spoiler, Television, The Young and the Restless 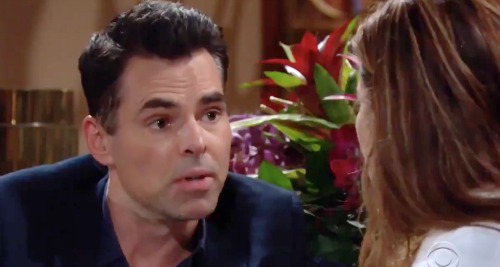 The Young and the Restless spoilers tease that Victoria Newman (Amelia Heinle) and Billy Abbott (Jason Thompson) will soon be on a mission. Victoria wasn’t happy when Billy showed up at her hotel room door after her night with Brandon Rose (Mitch Eakins). She didn’t like being tracked down and interrupted while she was just trying to get away from her Genoa City life for a while.

But it seems that there’s a new mystery that needs some investigating, and Billy will be on hand to help Victoria with it. Previously, Brandon mentioned to Victoria that he had seen Victor Newman (Eric Braeden) hanging out at a high-stakes poker game, and interestingly he was talking to people rather than playing the game. This got Victoria intrigued, and she’ll want to find out what’s going on with her dad.

Since Billy’s on the scene, it looks like he and Victoria will team up to find out exactly what The Moustache has been up to, since Y&R spoilers say that the two of them will work together on a project in Las Vegas. But of course, this could pose a problem for Billy, since he is supposed to be sworn off of gambling. Being around high-stakes poker games probably isn’t the best place for him to be right now.

Nevertheless, it seems that he and Victoria will head to a poker game together to do some sleuthing. According to Y&R spoilers, it will be tough on Billy, and he’ll have to seriously resist his urge to gamble. To make things harder on him, Victoria will end up gambling and winning big, so he’ll have to witness her big success.

But what will “Villy” find out about Victor and what he’s up to? That remains to be seen, but Y&R buzz is that it may have something to do with Adam Newman’s (Mark Grossman) comeback. Victor could be searching for Adam or have some sort of lead that he’s quietly trying to investigate. Victoria and Billy might interrupt or complicate his efforts.

Of course, if Victor’s actions do have to do with Adam in some way, it’s probably something that Victor would want to keep quiet until he’s certain about Adam’s actual status. He might not appreciate Billy and Victoria crashing his scene and trying to help.

What do you think Victor is up to, hanging around high-stakes poker games? Could it involve Adam’s return? Stay tuned to the CBS soap and don’t forget to check CDL often for the latest Young and the Restless spoilers, updates, and news.