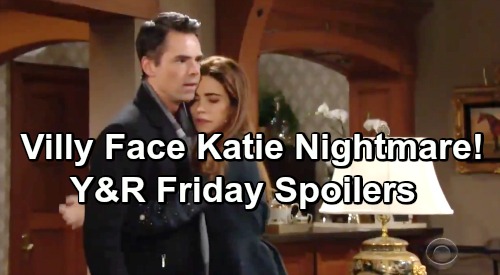 The Young and the Restless (Y&R) spoilers for Friday, February 1, tease that Billy Abbott (Jason Thompson) will turn to Phyllis Summers (Gina Tognoni) for advice again. It’s inappropriate for Billy to keep asking Phyllis for relationship guidance. After all, she’s the one who derailed his latest “Villy” reunion attempt. Phyllis is the reason Victoria Newman (Amelia Heinle) started battling doubts.

Of course, Billy isn’t without fault. He crossed the line in a big way by sleeping with Summer Newman (Hunter King), so he’s lucky Phyllis even speaks to him. They were on a break when Phyllis and Nick Newman (Joshua Morrow) hooked up, which means Billy didn’t have a right to complain in the first place.

Nevertheless, they’ve moved past that mess and are apparently at the stage where they can offer romantic pointers. Billy will need a few after he opens up to Phyllis on Friday. He’ll feel like he’s so close to having something special with Victoria again. Billy just can’t get Victoria to let her walls down and trust him. Since Billy isn’t exactly one of the most trustworthy people around, it’s easy to see why.

The good news is Billy and Victoria will indeed grow closer soon. The bad news is it’ll be due to a major family crisis. The Young and the Restless spoilers say “Villy” will face a tough blow on Friday’s new Y&R episode, February 1. Billy and Victoria will find out Katie Abbott (Sienna Mercuri) vanished from the ranch while Nikki Newman (Melody Thomas Scott) was napping. They’ll fear their daughter’s been kidnapped by a fierce Y&R enemy.

Billy will spin out over the possibility of losing another child. The thought of enduring that kind of pain again will be overwhelming. Delia Abbott’s (Sophie Pollono) death was the hardest thing Billy ever had to go through, so he’ll be determined to bring Katie home safely. He’ll also be furious with Nikki for falling asleep and letting Katie get snatched.

Nick will rush to Nikki’s defense and help Victor figure out what really happened. They’ll agree this wasn’t some random abduction. Victor’s adversary wants payback and is using Katie’s kidnapping as part of a revenge mission. Whether an alive J.T. Hellstrom (Thad Luckinbill) is to blame or someone else, Victor will want to stop the madness. He’ll be fired up about taking down the person responsible.

The police will be called, so Rey Rosales (Jordi Vilasuso) will undoubtedly be on the scene soon. He’s probably getting tired of all the Newman family drama, but that’s just part of the job in Genoa City! We’ll give you updates as other Young and the Restless details emerge. Stay tuned to Y&R and don’t forget to check CDL often for the latest Young and the Restless spoilers, updates, and news.