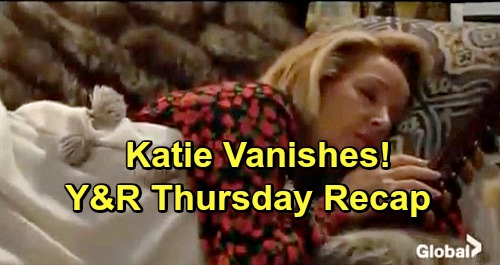 The Young and the Restless (Y&R) spoilers update and recap for Thursday, January 31, tease that Kyle Abbott (Michael Mealor) will be in a tight spot. He’ll assure Lauren Baldwin (Tracey E. Bregman) that he’s got two hot guys lined up as models for her photoshoot. Unfortunately, those models will face some travel issues.

While Kyle makes desperate calls, Summer Newman (Hunter King) will weigh in on her parents’ reunion. She’ll think Nick Newman (Joshua Morrow) and Phyllis Summers (Gina Tognoni) are both on the rebound. Summer will suggest that that’s why they haven’t gotten all that serious yet.

Soon after, Summer will start asking questions about J.T. Hellstrom (Thad Luckinbill). Since Nick will be adamant about clearing Victor Newman’s (Eric Braeden) name, Summer will wonder if he’s got any leads. She’ll want to know who the real killer might be.

Of course, Phyllis and Nick will quickly shift gears. They won’t be on board with this risky grilling session! At the coffeehouse, Ana Hamilton (Loren Lott) will scold Fenmore “Fen” Baldwin (Zach Tinker) for concentrating on his phone instead of work. He’ll be cocky about being a big-time recording star, but she’ll warn that one song doesn’t mean much.

A distressed Kyle will pop in next. He’ll wonder if Lily Ashby’s (Christel Khalil) modeling agency could help him, but Ana will point out that it isn’t up and running right now. Fen will gloat about his recent evening with Summer, which will lead to some traded barbs with Kyle.

Ana will eventually decide enough is enough. She’ll lash out at Fen for getting distracted and not putting real work into his career. Later, Fen will get a phone call that catches him off guard. At Jabot, Kyle will be shocked when Fen appears and reveals that he’s a replacement model. The decision will prompt Kyle to fill in for the other one. He’ll want to show Fen how it’s done!

Fen and Kyle will snap at each other throughout the photoshoot, but the project itself will be a success. Afterward, Summer will bump into Kyle and get quizzed about her date with Fen. She’ll hint that maybe Kyle’s jealous, but he’ll argue that he just doesn’t want Summer to get hurt.

Other Young and the Restless spoilers say Billy Abbott (Jason Thompson) will seek another shot. He’ll drop by Victoria Newman’s (Amelia Heinle) place and insist that they can make this work. Victoria won’t be interested in hearing Billy out. He suggested she was incapable of caring for anyone, so Victoria’s rejection will certainly make sense.

Nevertheless, Billy will keep at it. He’ll want to build trust and a future with Victoria, but she’ll remain concerned about Phyllis. Y&R spoilers say Billy will just think Victoria’s afraid of happiness, but she’ll indicate that this conversation is over.

At the ranch, Nikki Newman (Melody Thomas Scott) will seem distracted as Katie Abbott (Sienna Mercuri) rambles about her new friend. A little later, Nick will visit Nikki and offer support. She’ll be a mess over Victor potentially going on trial, but Nick will think Michael Baldwin (Christian LeBlanc) can handle it. He’ll make Nikki promise she won’t come clean to the cops.

Once Nick exits, Nikki will take a nap as someone spies. After Nikki awakens to the sound of glass breaking, she’ll call out for Katie. Sadly, the kid will be long gone! The Young and the Restless spoilers say Katie’s disappearance will kick off some major drama, so stay tuned.

It sounds like some fantastic scenes are on the way. We’ll give you updates as other Y&R news comes in. Stick with the CBS soap and don’t forget to check CDL often for the latest Young and the Restless spoilers, updates, and news.