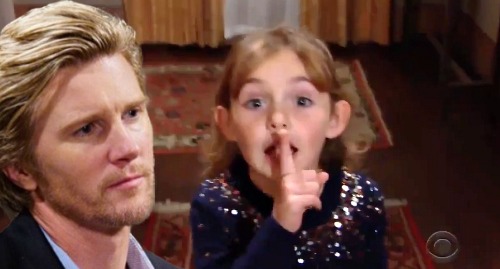 The Young and the Restless (Y&R) spoilers tease that Victor Newman (Eric Braeden) will keep his promise. In Tuesday’s episode, he assures Victoria Newman (Amelia Heinle) that Johnny Abbott (Holden and Ryan Hare) and Katie Abbott (Sienna Mercuri) can spend more time at the ranch. Victor wants to make it easier for Victoria to take on CEO duties while he’s stuck on house arrest.

Victoria caves and accepts the position, so it looks like Victor and Nikki will indeed take care of the kids later this week. Unfortunately, Nikki will make a crucial mistake. The Young and the Restless spoilers say Nikki let Katie out of her sight for a moment. When she turns around, the tot will be gone.

Unlike when Victor went looking for her, Katie won’t seem to be anywhere in the home or on the property. It won’t be long until Katie’s loved ones are completely freaking out. Victor will call the cops and insist that his granddaughter is missing. He’ll push the GCPD to get over there and do something about it ASAP.

Y&R’s weekly promo shows Billy Abbott (Jason Thompson) ranting about this potential kidnapping. He points out that he already lost Delia Abbott (Sophie Pollono), so he can’t lose another daughter. The thought of Katie turning up dead somewhere will fill his heart with dread.

Of course, we all know Katie will turn up sooner or later. Killing off a child is a huge deal. They wouldn’t be doing this almost comical invisible friend angle if they were going to do such a serious story. Instead, this is probably the final phase of the tormentor’s elaborate plan. There’s no confirmation on who that tormentor might be, but J.T. Hellstrom (Thad Luckinbill) still seems like a great option.

Victor is insanely wealthy, so he should have top-notch security at the ranch. He can afford the very best. With that in mind, how exactly did someone sneak on the property over and over again? There was the stables fire and the evidence that surfaced during that ordeal. Nikki also found J.T.’s dirty clothes in her bed. The fireplace poker that was used to kill J.T. appeared eventually.

Plus, someone has installed video equipment to observe the activity at the ranch. J.T. was a security expert, so he makes perfect sense as someone capable of doing all this undetected. That brings us to Katie and the unseen “friend” she keeps talking to. Perhaps J.T. installed audio equipment along with the video feed. He could easily be speaking to Katie and just cutting it off whenever anyone else enters.

J.T. would also be the ideal kidnapper since Katie would trust him. He was almost her stepdad, so she would have no qualms about going with him if he appears in person later this week. J.T. could have a couple motives here. For starters, it’d be punishment for Victoria.

J.T. can’t be in Reed Hellstrom’s (Tristan Lake Leabu) life or the lives of his kids with Mackenzie “Mac” Browning. It’s easy to imagine him wanting to swipe Katie and scare Victoria a bit. However, the main goal of all this might be using Katie as bait or leverage.

Maybe J.T could draw Victor out for a final showdown in hopes of killing him. Then again, he could argue that Katie will be returned if the cover-up crew owns up to what they did. J.T. might even put all of that on his list of demands. Katie could be his ticket to getting everything he wants!