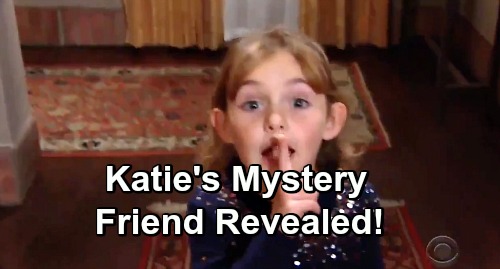 The Young and the Restless (Y&R) spoilers tease that Victor (Eric Braeden) and Nikki (Melody Thomas Scott) will be forced to take extreme measures to protect the entire Newman family while a still-unknown threat looms.

Someone is talking to Katie without her parent’s approval. But who is this unseen villain?

Y&R fans were happy when the next part of this very long storyline, centered upon J.T.’s death, was entered. Nikki’s tell to Nick (Joshua Morrow) and then Victor brought both Newman men into the information fold. That was needed in order to advance what can happen next.

Victor allowing himself to be arrested for a crime he guessed Nikki committed was intended to take focus off his wife. However, Niktor has no idea that they’re being watched via a hidden surveillance system. That clearly begs the plot point as to who could possibly have access to the Ranch to have put the physical equipment in place, unless existing hardware has simply been hacked?

Viewers don’t need to necessarily conclude that the villain is technologically sophisticated. Instead, this person, or people, could have paid someone to do their bidding.

After an initial momentary scare, Katie disappears during a second incident this week on Y&R. That development, combined with viewer’s knowledge of whoever is keeping an eye on anyone who’s at the Ranch, confirms real danger.

Nick’s recent verbal review of various characters, including Kevin (Greg Rikaart), Ian (Ray Wise), Chelsea (Melissa Claire Egan), and some others appeared to actually rule former cast members out, rather than in. But possibly the writing staff was tipping its hand and did offer a clue? With whatever the case, the next step to be taken involves someone discovering that the Newman’s are being watched.

It does feel strange that Y&R would replay the Adam Newman (as then played by Justin Hartley) angle, where he was secretly watching Chelsea and Connor (Gunner and Ryder Gadbois) at the penthouse from his remote location.

That part of Adam’s return storyline took place five years ago. So possibly, TPTB feel enough real and soapy time has passed that enough viewers wouldn’t be bothered with a somewhat similar redo?

Fans are rightfully expecting this entire arc to wrap soon, as executive producer and head writer Mal Young’s work will soon by played out. It would seem that the former top boss probably was allowed a clean break, where he completed this story’s telling.