BY Heather Hughes on June 6, 2019 | Comments: one comment
Related : Soap Opera, Spoiler, Television, The Young and the Restless 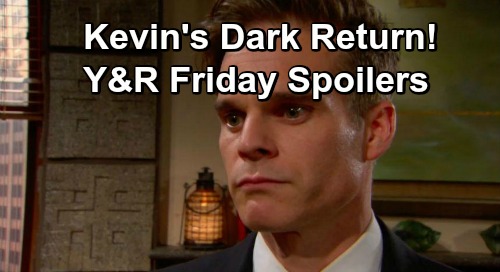 The Young and the Restless (Y&R) spoilers for Friday, June 7, tease that Phyllis Summers (Gina Tognoni) will find herself stuck. On Thursday, June 5,  someone dressed in a black hoodie sneaks up behind Phyllis and injects her with a needle. When she wakes up elsewhere on Friday, Phyllis may meet her surprising kidnapper and learn why she’s been snatched.

Phyllis will have no choice but to follow orders. Which character could be behind Phyllis’ shocking abduction? There’s no confirmation on that yet, but there’s one intriguing possibility worth considering. The Young and the Restless spoilers say Kevin Fisher (Greg Rikaart) will pop up again on Friday, so the timing alone is suspicious.

Is there a reason why Kevin’s first day back onscreen is happening right after Phyllis’ kidnapping? It could be a coincidence, but there are other clues that point in Kevin’s direction. We know Kevin will revert to his dark side upon his return. He’ll make some desperate moves as well as a risky deal in the week ahead. Kidnapping Phyllis and forcing her to make a deal would be risky!

Of course, the big question here is why Kevin would do this. Why not just approach Phyllis if he needed her help instead of going to extremes? Sometimes drama is a good enough answer, but there could be other reasons that viewers aren’t privy too yet.

Whatever the case, Y&R fans can expect to see Kevin on Friday. This also appears to be Gina Tognoni’s last day as Phyllis, so enjoy her scenes while you can! Meanwhile, an old rivalry will rev up. Could that be the one between Victor Newman (Eric Braeden) and Nick Newman (Joshua Morrow)?

Nick and Adam Newman’s (Mark Grossman) rivalry is already in full swing, but Nick and Victor’s feud hasn’t quite gotten that far yet. However, The Young and the Restless spoilers say Victor will be forced to pick a side soon. If he stands with Adam, that could cause a serious setback.

On the other hand, Adam and Victor’s rivalry hasn’t reached a boiling point yet either. Victor taking Nick’s side in the looming custody battle could truly reignite it. Naturally, there are plenty of other options in Genoa City, but the Newmans are the focus at the moment. If there’s a rivalry going on, it has to involve their family in some way.

Regardless, Nick will have to give Adam an answer to Thursday’s ultimatum. We have no doubt that Nick will pick Christian Newman (Jude and Ozzy McGuigen) over Dark Horse if he has to, but he may fight for both if he can. We’ll give you updates as other Y&R news comes in. Stay tuned to the CBS soap and don’t forget to check CDL often for the latest Young and the Restless spoilers, updates, and news.