The Young and the Restless Spoilers: Has Lola Destroyed the Real Kyle or Simply Made Him a Better Man – Y&R Fans Weigh In

BY Kinsley Goldman on June 1, 2019 | Comments: one comment
Related : Soap Opera, Spoiler, Television, The Young and the Restless 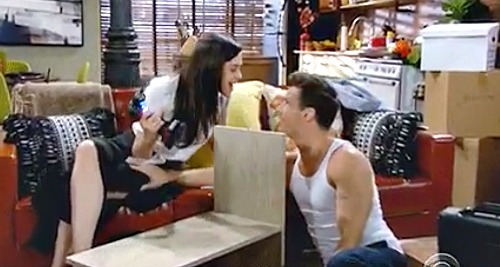 The Young and the Restless (Y&R) spoilers reveal that Kyle Abbott (Michael Mealor) has undergone some major changes in his life. When Mealor first debuted in the role, we got a bit more of Kyle’s scheming side. Of course, we got those softer moments as well. Kyle eventually formed a bond with Dina Mergeron (Marla Adams) and gave Mariah Copeland (Camryn Grimes) sweet support.

However, Kyle still had a bit more edge back then. After Lola Rosales (Sasha Calle) walked into his life, Kyle began to move in another direction. He became an old romantic who was all about grand gestures and trying to please the lucky lady in his life. There are certainly some pros and cons here, so let’s take a look at them.

First, we talk about some of the ways Lola is good for Kyle. She makes him happy, which is definitely a plus. These can’t get enough of each other, so we can’t deny that they’ve found a special spark. Kyle has also learned how to listen and respect what Lola needs in a relationship, so he’s grown from the experience.

Nevertheless, we can’t ignore the downside in all this either. Kyle complained when he was first taken off the project with Summer Newman (Hunter King), but it was the right call. He couldn’t devote enough attention to it thanks to all the time he spends with Lola. It seems Kyle’s too focused on Lola to care about anything else except for Dina recently.

That limits the character in some ways, especially since Y&R has watered down Kyle’s scheming nature. It’s a shame since they could’ve chosen to play that up, even with Lola in the picture. She debuted as someone tough and had that “cool girl” vibe about her.

Lola told a great story about how she duped the employer who wouldn’t hand over her checks. She stole car parts from all the other cars off the lot to fix her food truck and got him to sign the lease before he ever figured it out. Lola’s a schemer at heart – at least when it’s justified! She’s not in Summer’s league when it comes to casual manipulation, but it’d be fun to see Lola’s fierce side a bit more.

Perhaps then we could get a little more of the old Kyle back. It’s all about balance. The Young and the Restless fans are certainly divided over “Kola” on social media. Some viewers are loving Kyle and Lola’s connection. Others just aren’t feeling them together and don’t like the changes they’ve seen.

One fan tweeted, “I love seeing Kyle and Lola being domestic. Give us more. I eat it up.” Another viewer insisted, “Lola devours him, Y&R needs to move on from them, not interesting anymore.” “Cohabiting Kyle & Lola are making me swoon,” one fan insisted. While another said, “They have destroyed Kyle. He used to have some pizzazz.”

How do you feel about the “Kola” pairing? Do you think Lola destroyed Kyle or made him a better man? The Young and the Restless spoilers say trouble’s brewing in Kyle and Lola’s romance, so stay tuned to see how they’ll handle the chaos!

We’ll give you updates as other Y&R news comes in. Stay tuned to the CBS soap and don’t forget to check CDL often for the latest Young and the Restless spoilers, updates, and news.