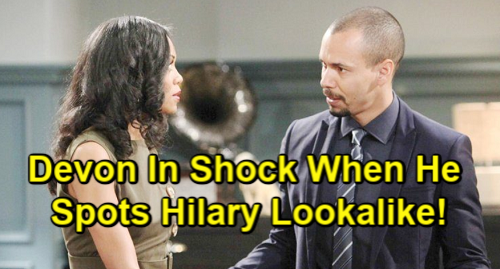 The Young and the Restless (Y&R) spoilers tease that Devon Hamilton (Bryton James) could get a major blast from the past – well, sort of. TV Source recently reported on some buzz about Mishael Morgan’s comeback with a twist. Word has it Morgan is returning to the show in a brand-new role, instead of reprising the part of Hilary Hamilton.

Devon recently had some nice closure scenes that involved his relationship with Hilary. There was a sense of finality about them – like Devon was genuinely shutting the door on that chapter and accepting that he had to find a new one.

That lines up with the idea of Morgan potentially playing someone new. It feels like Devon finally let go, so The Young and the Restless may have let go, too.

Of course, there are pros and cons to Morgan playing someone besides Hilary. On the plus side, it makes it easier to do a love triangle with Elena Dawson (Brytni Sarpy). If Hilary herself came back in the picture, there’d be no contest. Devon would reunite with his beloved wife in a heartbeat.

If Hilary’s long-lost twin or lookalike hits Genoa City, then things get complicated. She’d seem like Hilary, but she wouldn’t be the real her. Devon would undoubtedly struggle to make sense of that, which would give Elena and Devon a good story. They clearly need better obstacles than paying off student loan debt and having too many Hilary reminders around the penthouse.

However, there’d be a downside here. Ever since Hilary was killed off, there’s been a void for many Y&R fans. The show tries to sell Hilary as a saint now, but she was mostly a fun schemer who would do anything to get what she wanted.

Will Morgan’s New Character Be Hilary Curtis With A New Name?

Morgan had the ability to remain likable while being cutthroat at times. Hilary was Hilary! She had a softer side underneath, but that didn’t change her attitude.

By bringing Morgan in as a new character, that could mess with things. Will she basically play Hilary with a new name? Will they opt to take Morgan’s character in a softer direction instead? If so, they may run into the problem of too many gentle souls. Elena is a real sweetheart, which is great, but we need some forces to be reckoned with thrown in the mix as well.

There’s no confirmation on Morgan’s official return yet, but that’s still the news that’s buzzing. The Young and the Restless spoilers say Devon and Elena’s next big hurdle may be just around the corner!