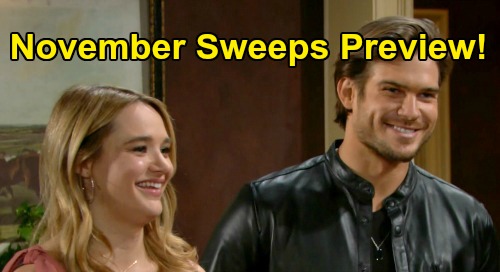 The Young and the Restless (Y&R) spoilers tease that some bombshells are brewing in Genoa City. Several storylines are heating up, and they’re going to build to some November sweeps shockers. Let’s look at a preview of what’s in coming up for fans.

For starters, Chelsea Newman’s (Melissa Claire Egan) past may catch up with her. Y&R fans know Chelsea’s been adamant about putting con jobs and dirty schemes behind her. However, Chelsea couldn’t resist giving the money Calvin Boudreau (John Burke) left her a good wash. With Kevin Fisher’s (Greg Rikaart), Chelsea’s set herself up for more trouble – trouble that will likely explode during November sweeps!

The Young and the Restless spoilers say Jeffrey Vincent Parise (ex-Carlos Rivera on General Hospital) will play Simon Black for a short stint this November. Based on all the clues and buzz, it looks like Simon will be connected to Chelsea. Will he demand that a debt be repaid? Kevin warned Chelsea to only take a little at a time out of the account, but she may be forced to clean it out instead.

Of course, we’ve also got Nick Newman’s (Joshua Morrow) political career in the works. He seems poised to run for that councilman spot – and we smell a scandal! However, scandals are pretty much the norm for the Newman clan. Perhaps Nick can salvage his campaign, even if Chelsea’s past blows up and he gets caught in the mess.

Chelsea and Nick’s relationship, on the other hand, could be headed for turmoil. Since Connor Newman’s (Judah Mackey) going to be living at Adam Newman’s (Mark Grossman) penthouse for a while, that’ll be an easy place for Chelsea to crash if “Chick” issues emerge. Y&R fans should see Chelsea and Adam’s bond deepen, which feels right since “Chadam” was always the deeper love story.

Meanwhile, Traci Abbott (Beth Maitland) and Jack Abbott (Peter Bergman) will keep digging for answers. They’re on the verge of uncovering a major Abbott family secret, which involves Dina Mergeron’s (Marla Adams) past with Stuart Brooks. Did Dina give her child with Stuart up for adoption? That’s the top theory right now, and Theo Vanderway (Tyler Johnson) has been buzzed about as a potential long-lost grandson.

Eric Vanderway (John Briddell) is set to make an appearance this November, and his last name has led to suspicions that this is a flashback involving Theo’s father. Of course, it’s also possible Eric is an uncle or another relative. There’s even a chance Theo deceived Summer Newman (Hunter King) about his dad’s death, but that might take more than a one-day appearance to tackle.

Regardless, The Young and the Restless spoilers say we’ll learn more about Theo’s history – which may have ties to Kyle Abbott (Michael Mealor) and others related to Dina. As for Theo’s romance with Summer, disaster could be brewing. Theo’s getting just a bit too comfortable around Lola Rosales (Sasha Calle). Lola’s also been sparring with Kyle just a bit too much! This all seems to be building somewhere that won’t end well for “Kola.”

Will Kyle’s New York secret finally be revealed or has all that been dropped? Regardless, Lola and Kyle will continue to face drama. That drama just might push Lola in Theo’s direction. There have been plenty of pregnancy hints, so Y&R could do a paternity mystery if Lola sleeps with Theo as well. It’ll be interesting to see what Kyle and Lola’s marriage problems lead to.

As for Summer, her feelings for Kyle are on the verge of exploding. That certainly isn’t going to help the “Kola” crisis. On a happier note, Rey Rosales (Jordi Vilasuso) and Sharon Newman’s (Sharon Case) relationship will likely flourish this November. It’s always nice to have a blissful couple or two in town.

Elsewhere, the bizarre situation surrounding Katherine Chancellor’s (Jeanne Cooper) will should become clearer. It’s doubtful Cane Ashby (Daniel Goddard) will truly end up with Devon Hamilton’s (Bryton James) money – at least not for good! There are still some secrets to be revealed – like who the “old jerk” is and why Hilary Hamilton’s (Mishael Morgan) lookalike, Amanda Sinclair (Mishael Morgan), was brought into this.

Someone wanted to mess with Devon, but why if everything was supposedly on the up and up? And why is everyone so essential to this story unreachable? This is obviously a shady setup of some sort – no matter what the “facts” claim. This is all building to Cane’s eventual exit, so stay tuned for some hot drama.