The Young and the Restless Spoilers: How J.T. Survived Being Killed and Buried – Shocking Explanation Revealed 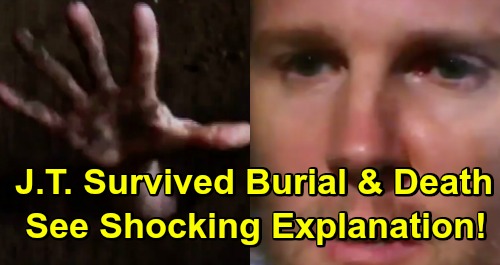 The Young and the Restless spoilers tease that a variety of scenarios could have allowed J.T. Hellstrom (Thad Luckinbill) to survive Nikki’s (Melody Thomas Scott) physical attack and the Coverup Crew’s attempt at unknowingly burying him alive. As the often seen map in the Genoa City Police Department shows, this fictional city exists in the daytime world. That makes impossible scenarios possible.

As various members of the one-time coverup crew discussed, it could be that J.T.’s pulse was faint and therefore was undetectable. The four ladies therefore believed he’d been killed, panicked, and acted as they did. Their conclusion wasn’t outlandish.

The Coverup Crew, including Immunity Phyllis (Gina Tognoni), came to realize that it should have contacted the authorities and certainly never provided unauthorized Coroner services by transporting J.T. to Chancellor Park. They also shouldn’t have deemed themselves funeral directors, opting to handle midnight services at a location that was intended to permanent honor Katherine (Jeanne Cooper) life.

Most intriguingly, how would J.T. have survived being buried under six rectangular feet of dirt for any length of time?

An air pocket isn’t plausible, but an unseen sewer pipe could have been accessible. Hardcore viewers recall that the section of Chancellor Park Nikki led the Girls Night In gang to was being refurbished by Arturo’s (Jason Canela) construction company at the time. Work that was being done could have enabled this type of escape hatch to exist. Then again, good fortune may have allowed J.T. to be thrown into a specific area where the pipe had always been.

The ladies dumped J.T.’s rug-rolled body into the grave they dug. Then Vickie (Amelia Heinle) insisted on being the first person to shovel dirt on top of him, as some form of respect for J.T. being Reed’s (Tristan Lake Leabu) dad.

No more than a few minutes would have passed until J.T. was fully conscious. Using human survival instincts, he saw a hole, being the sewer pipe, or whatever Y&R will make it be, and crawled toward the air source which also became his pathway to sustained life.

If the above scenario isn’t used, then J.T. would have had to somehow dig his way to GC ground level. A to-be-revealed character who witnessed his burial could have quickly dug him up as well. When compared to the sewer pipe option, is either, above alternative more believable?

Soap fans know they are watching escapist fantasy. So the highly unlikely, if not impossible, nature of J.T.’s survival isn’t actually the main issue. Instead, Y&R’s coming wrap to this long arc will be judged on its overall entertainment value.