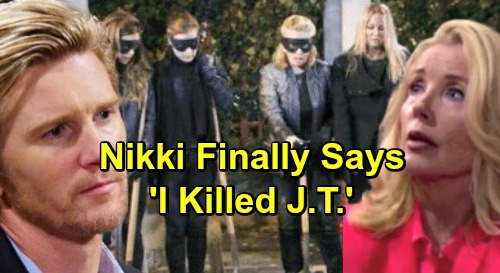 The Young and the Restless (Y&R) spoilers tease that we’re nearing a crucial point in the J.T. Hellstrom (Thad Luckinbill) saga. From the moment Nikki Newman (Melody Thomas Scott) whacked J.T.’s skull, she’s been stuck in nothing but drama. Of course, Nikki’s partners in crime have been stuck in it with her. The cover-up crew has faced plenty of close calls and epic blunders along the way.

Nevertheless, we all knew someone was bound to reach her breaking point sooner or later. Nikki, Victoria Newman (Amelia Heinle), Sharon Newman (Sharon Case) and Phyllis Summers (Gina Tognoni) made a pact to protect each other, but it won’t last. Their alliance will soon be turned upside down by a unilateral decision.

Phyllis will believe she’s averted disaster when she stops Nikki’s confession at the memorial service. She’ll blurt out the J.T. abuse shocker and let that become the topic of conversation instead. Phyllis will enrage Victoria and Nick Newman (Joshua Morrow), but she’ll take whatever they dish out. She’ll feel like she had to stop Nikki from making a horrible mistake.

Unfortunately, Phyllis’ move will only delay the inevitable. Nikki’s on the verge of cracking and nothing can stop her indefinitely. The Young and the Restless spoilers say Nikki will be put under surveillance next week, January 14-18. That could play a role in the pressure finally getting to her. Between that and the post-memorial mayhem, Nikki will decide she’s had enough.

Y&R fans can indeed expect a confession from Nikki. She’ll actually say the words “I killed J.T.” to someone. Will Nikki come clean to Rey Rosales (Jordi Vilasuso) and try to put an end to this nightmare? Will she share the truth with Nick if he pushes too hard? Those appear to be the two most likely candidates when it comes to hearing Nikki’s admission.

Whether Nikki goes to the cops now or not, she will at some point. The Young and the Restless spoilers say Nikki will try to do the right thing and prevent any more pain. However, somebody will step up to take the rap for Nikki and that’ll spin the cover-up crew into a tizzy. Their fragile alliance will fall apart, so be prepared for major drama.

It sounds like Nikki’s big confession will spark some serious trouble. We’ll give you updates as other Y&R news comes in. Stay tuned to the CBS soap and don’t forget to check CDL often for the latest Young and the Restless spoilers, updates and news.