The Young and the Restless Spoilers: Justin Hartley Weighs In On New Chadam Pairing

BY hellodrdavis on June 3, 2019 | Comments: one comment
Related : Soap Opera, Spoiler, Television, The Young and the Restless 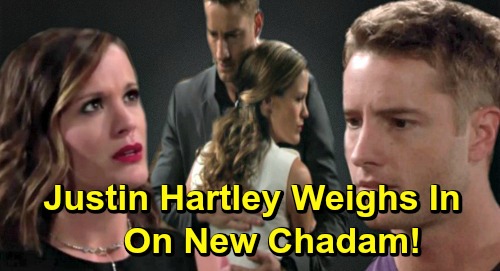 The Young and the Restless spoilers has some news to pass on about some new and former Y&R stars and their awesome camaraderie. As you might have seen, a photo (which you can see below) recently circulated of Mark Grossman, who recently took over the role of Adam Newman, and Melissa Claire Egan, who will be soon be reprising her role as Chelsea Newman.

The photo was posted to both Mark’s and Melissa’s Instagram accounts with the caption reading: “Well well well, what do we have here…#chadam #yr.” The post received a huge number of likes and comments on each of their accounts, as fans are clearly excited about seeing Adam and Chelsea back together on their screens.

But fans weren’t the only ones who were enthusiastic about the photo. Justin Hartley, who portrayed Adam Newman on Y&R from 2014-2016, also commented on the photo. He wrote: “LOVE it!! Can’t wait to see what you two are up to. This is a very good thing! A very very good thing!!!”

Justin’s wife also commented on the post. Chrishell Hartley, who portrays Jordan Ridgeway on Days of Our Lives), simply replied, “Yes please!!” to the post.

It’s great to see Justin and Chrishell showing enthusiasm for Mark Grossman’s version of Adam. Of course, there are different fan bases for the various incarnations of Adam that have appeared over the years, with many fans preferring “their” Adam and rejecting the “other” versions of the character.

But fortunately, it seems that the actors are supportive of each other, and it’s nice to know that Justin keeps up with what’s going on currently on Y&R and is interested in what’s happening with the character he used to portray.

What do you think about the “Chadam” photo? Are you excited about seeing this couple reunite with Mark Grossman’s version of Adam? Stay tuned to the CBS soap and don’t forget to check CDL often for the latest Young and the Restless spoilers, updates, and news.

Well well well, what do we have here… #chadam #yr @mgrossman18