The Young and the Restless Spoilers: Lily Divorces Cane – Couple Grows Apart While Lily’s In Prison

BY hellodrdavis on January 9, 2019 | Comments: 2 comments
Related : Soap Opera, Spoiler, Television, The Young and the Restless 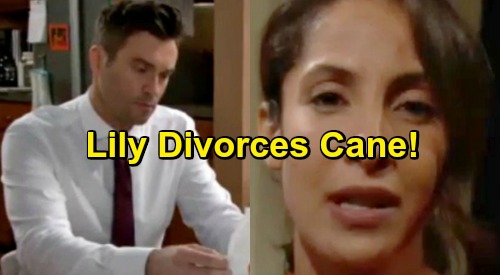 The Young and the Restless spoilers tease that Cane Ashby (Daniel Goddard) and Lily Ashby (Christel Khalil) are headed for trouble. Life has changed for both of them dramatically ever since Lily was sentenced to prison. Lily has had to adapt her perspective in order to survive on the inside, and Cane is shouldering the burden of being a single parent to his kids.

The two of them tried to prepare themselves for the large amount of time they’d have to spend apart. But they weren’t prepared for the changes that each of them would face during Lily’s prison term.

Lily recently wrote Cane a letter in which she outlined some of the changes she was undergoing. She wrote that she wasn’t able to share her day-to-day life with Cane, but that she still dreamed of the past and the future.

Her letter upset Cane, who could clearly sense just how far away emotionally Lily is from him right now. In order for her to survive in prison, she has to be fully engaged and focused on the here and now – something that Cane will never be able to understand or appreciate.

And although it hasn’t been shown on screen, all indications are that Cane and Lily’s in-person visits and phone calls are strained as well. The two can’t seem to connect like they used to, and it’s frustrating for them both. Lily is coping by putting her focus on the other inmates and doing what she has to do to survive, and Cane is coping by drinking and acting out.

It’s clear that something is going to have to give in their marriage. If they keep drifting apart at this rate, how will their marriage survive? It seems from her letter that Lily is really feeling an emotional separation from her husband, so how long until she suggests a physical separation, or even a divorce?

Of course, if Cane ultimately decides to confess to Lily about kissing Victoria Newman (Amelia Heinle), then the chances that Lily will want a divorce will only increase. Jill Atkinson (Jess Walton) tried to get through to Cane and insisted that he keep the kiss to himself, but Cane seems to really feel a need to tell Lily about it. If he does, it will not only devastate Lily, but further weaken their bond.

Do you think Lily and Cane are headed for a divorce? Stay tuned to the CBS soap and don’t forget to check CDL often for the latest Young and the Restless spoilers, updates, and news.