BY Marcy Cohen on May 5, 2019 | Comments: one comment
Related : Soap Opera, Spoiler, Television, The Young and the Restless 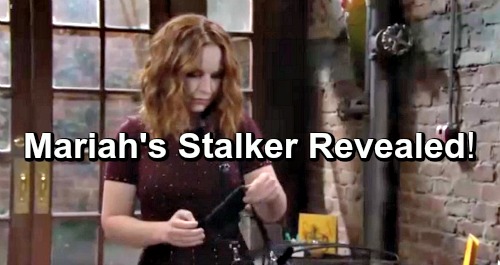 The Young and the Restless (Y&R) spoilers tease that Mariah Copeland’s (Camryn Grimes) concerns will grow stronger. After a brick crashed through the window of Crimson Lights with a disturbing note attached, Mariah tried to brush it off. However, Tessa Porter (Cait Fairbanks) suspected Mariah was just pretending she was unbreakable. This is obviously the kind of thing that would leave someone shaken!

Unfortunately, the threat’s revving up and so are Mariah’s fears. In Friday’s Y&R episode, May 3, Mariah got a text that seemingly confirms we’re dealing with a stalker situation. The previous message told Mariah to give up the gossip and added that she was ruining people’s lives. Friday’s message insisted this person won’t be ignored and promised that someday soon Mariah will know his or her pain.

We’ve got a hot mystery on our hands! Of course, that brings us to the question everyone’s asking: Who’s stalking Mariah? Before we speculate on who it might be, let’s consider who it probably isn’t. We’ve seen some guesses that don’t quite add up on social media, so we should talk about the unlikely candidates. 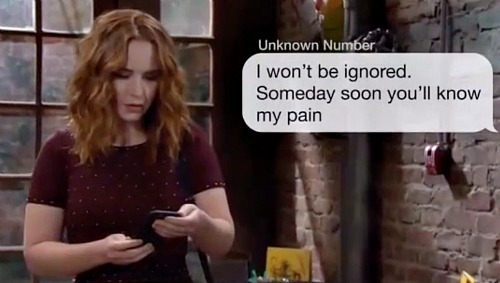 Some viewers have suggested Ana Hamilton (Loren Lott) due to the tension at their meeting with Tessa, but that seems extremely farfetched. Remember the brick came hurling through BEFORE that tension. Ana was perfectly pleasant to Mariah when Tessa sang “Clear My Mind” live at the coffeehouse.

Even at the recent meeting, it was more of a “let’s smile and pretend we’re all fine” kind of thing. Ana is a sweet gal and has done nothing to indicate that she’d have some sort of vendetta against Mariah. Devon Hamilton (Bryton James) is also Mariah’s boss, so anything that hurts Mariah and GC Buzz would hurt him, too. It seems we can safely rule Ana out.

A few Young and the Restless viewers out there have even suggested Kevin Fisher (Greg Rikaart), which is just plain crazy. There’s absolutely no way Mariah’s old bestie would target her, so we can cross him off the list. Another option Y&R fans have been tossing around is Ian Ward (Ray Wise), but let’s be honest: bricks, notes and texts aren’t really his style.

Mia Rosales (Noemi Gonzalez) is one more possibility that some viewers have mulled over, but the text makes it clear that Mariah is indeed the target. Mariah hasn’t caused Mia pain and it’s not like Mia needs to commit any more crimes. The Young and the Restless spoilers say Mia has enough on her plate trying to cover up that attack on Lola Rosales (Sasha Calle).

There’s also that creepy guy that Mariah bumped into, who makes another appearance when he stares at Mariah on Monday. He’s certainly strange, but he seems like a red herring. The guy looks more nervous than anything and honestly, “Teriah” could take this wimp. It feels too early to reveal the stalker onscreen, so it’s probably not him.

Now that we’ve discussed who it’s not, we have to consider the real culprit’s identity. Although we noted Ian isn’t too likely, it could be someone Mariah knew from back in her cult days or a shady chapter that came later.

The first message specifically mentioned gossip though. It seems more like Mariah has covered something viewers aren’t privy to. Perhaps a story Mariah did in the past will be written in to explain everything. GC Buzz is more of a talk show than a gossip show these days, but Mariah could still have hurt someone unintentionally with some old reports.

It appears the point of this storyline isn’t really about who the stalker is. There’s a good chance we won’t know this person just like we didn’t know the thugs threatening Tessa. The real reason for this storyline is a role reversal. It’s about shifting the balance of power in Mariah and Tessa’s relationship.

This fits in with Tessa’s music career story as well. Mariah has consistently come to Tessa’s rescue for quite a while now. She’s used to stepping up for her and saving the day. Now Tessa’s finding her footing while Mariah’s the one facing all the danger and drama. Their relationship is changing, and we’ll get to see how they deal with that.

Let’s hope it’ll eventually be Tessa’s turn to rescue Mariah and put an end to this nightmare! We’ll give you updates as other Y&R news comes in. Stay tuned to the CBS soap and don’t forget to check CDL often for the latest Young and the Restless spoilers, updates, and news.