BY Heather Hughes on April 26, 2019 | Comments: one comment
Related : Soap Opera, Spoiler, Television, The Young and the Restless 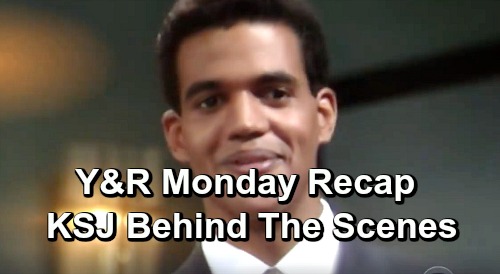 The Young and the Restless (Y&R) spoilers and recap for Monday, April 29, tease that the CBS soap will conclude their recent memorial arc with a tribute to Kristoff St. John (Neil Winters). Y&R really spent some time getting this right, so fans should be pleased. The episode will kick off with the cast expressing what St. John meant to them, both personally and professionally.

In addition to showing plenty of old photos, they’ll feature special footage of when St. John won his Daytime Emmy for Outstanding Younger Actor in a Drama Series. Next, Victoria Rowell (ex-Drucilla Winters) will talk about St. John being cast as her love interest. Shemar Moore (Malcolm Winters) will also describe being starstruck when he met St. John for the first time.

Christel Khalil (Lily Ashby) will also admit St. John felt like her real father in their scenes together. The love between them was always very real. Bryton James (Devon Hamilton) will be in agreement on that. He’ll insist St. John was the kind of performer who gave you such a sense of safety. James will comment on the brilliant energy St. John always brought on set as well.

Other Young and the Restless spoilers say Peter Bergman (Jack Abbott) will reflect on 37 years of knowing and respecting St. John. When Bergman did scenes with him, it was so easy for St. John to step up and take the lead. Mishael Morgan (ex-Hilary Hamilton) couldn’t miss out on honoring St. John, so she’ll be back to talk about the wonderful way he made everyone feel.

Daniel Goddard (Cane Ashby) will also pay tribute to St. John as an icon he was in awe of. Then, Eileen Davidson (Ashley Abbott) will reflect on her most recent work with St. John. The Young and the Restless viewers will recall that Ashley and Neil briefly became an item. Davidson will add that despite any personal difficulties of his own, St. John was always eager to check on everyone else.

Sharon Case (Sharon Newman) and Joshua Morrow (Nick Newman) will share some memories, too. The same goes for Melody Thomas Scott (Nikki Newman) and Eric Braeden (Victor Newman), who will speak about St. John’s bright spirit. Amelia Heinle (Victoria Newman) will always be grateful for the last time she embraced St. John. The cast will agree he gave the best hugs around.

Jason Thompson (Billy Abbott) and Marla Adams (Dina Mergeron) will weigh in before Doug Davidson (Paul Williams) reads a special passage. He’ll note that it was one St. John passed along to him before his death. The Young and the Restless spoilers say this tribute will feature many flashbacks of Neil’s best moments. There’ll even be some fun behind-the-scenes footage of the cast goofing around.

Lauralee Bell will help wrap up the show by hoping St. John is up there with her father, Bill Bell. St. John’s voice will be heard telling expressing his love before Y&R displays “In Loving Memory.” It sounds like this tribute will be everything fans could want and more.

We’ll give you updates as other news comes in. Stick with the CBS soap and don’t forget to check CDL often for the latest Young and the Restless spoilers, updates, and news.