The Young and the Restless Spoilers: Monday, May 20 – Sharon Finds Adam Bleeding Out – Shooter Leaves The Money

BY Heather Hughes on May 17, 2019 | Comments: one comment
Related : Soap Opera, Spoiler, Television, The Young and the Restless 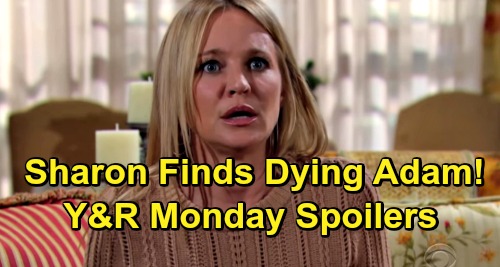 The Young and the Restless (Y&R) spoilers for Monday, May 20, tease that a shocking discovery is on the way. After being shot by an unknown assailant on Friday, Adam will be left bleeding out and in desperate need of medical attention. He’ll be fading fast in Monday’s episode, but help is coming soon.

Fortunately, it looks like Sharon Newman (Sharon Case) will end up at the tack house. She might hear the commotion or even just sense that something’s wrong. After all, Y&R is playing up Adam and Sharon’s intense connection! Whatever the case, Sharon should freak over Adam’s gunshot wound and call 911 immediately.

Thanks to Sharon’s quick thinking, Adam will make it to the hospital in time. The Young and the Restless spoilers say Adam will need emergency surgery, so Victor Newman (Eric Braeden) will be a nervous wreck. He’ll be relieved when he learns the procedure was a success. Victor will feel like he’s once again been given an opportunity to make things right with his son.

Y&R fans can expect some sweet moments as Victor sits by Adam’s bedside. He’ll assure Adam that he’s there for him and refuse to give up on getting those memories back. That part’s crucial if Victor wants Adam to remember their old bond. Victor and Adam certainly had a messy, complicated relationship, but there were some good times mixed in with the bad.

Luckily, Adam will recognize Victor as his father when he awakens. Other memories will follow, but what about Adam’s shooter? He may be a bit fuzzy on that part. It’s also possible the person was wearing a mask or disguised in some way. Regardless, The Young and the Restless spoilers state that Paul Williams (Doug Davidson) will start an investigation ASAP.

Since the person wielding the weapon chose to gun Adam down and leave the cash stash behind, that says a lot about his or her motives. Paul will determine that this person was out to get Adam, not rob the place. Some other useful clues may surface after a look around the scene of the crime. Paul will go over everything thoroughly and try to figure out who’s to blame for Adam’s ordeal.

Nick Newman (Joshua Morrow) will grill Billy Abbott (Jason Thompson) at some point this week. Billy should shut down Nick’s suspicions about him being the shooter, so this mystery will continue to heat up. We’ll give you updates as other Y&R news comes in. Stay tuned to the CBS soap and don’t forget to check CDL often for the latest Young and the Restless spoilers, updates, and news.

PREVIEW FOR NEXT WEEK! #YR pic.twitter.com/i2iNd8WvcJ