The Young and the Restless Spoilers: Week of May 20 Preview – Nick Suspects Billy Shot Adam – Rey Moves In with Sharon

BY Heather Hughes on May 16, 2019 | Comments: one comment
Related : Soap Opera, Spoiler, Television, The Young and the Restless 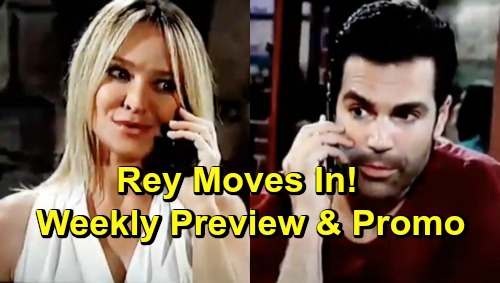 The Young and the Restless (Y&R) spoilers for the week of May 20-24 tease that some mysteries will unravel. For starters, Paul Williams (Doug Davidson) will be at the crime scene following Adam Newman’s (Mark Grossman) shocking shooting. Adam takes a bullet in Friday’s episode, so he’ll be rushed to the hospital in the week ahead.

While Adam recovers from his injuries, Paul will hope to figure out who shot him. He’ll do some digging at the tack house along with one of his detectives. When they find that huge stash of cash, they’ll know robbery wasn’t the motive. Adam was specifically targeted, but who pulled the trigger? That’s exactly what Paul will do his best to figure out in the coming episodes.

As for Adam, he’ll claim it’s all coming back to him. Y&R spoilers say Adam will awaken in the hospital and insist he remembers everything from his past. Of course, Adam will still face some naysayers. Nick Newman (Joshua Morrow) will accuse Adam of faking both his amnesia and this sudden memory flood.

That won’t be the only accusation Nick considers on next week’s new Y&R episodes. The Young and the Restless spoilers say Nick will also confront Billy Abbott (Jason Thompson). He’ll wonder if there’s any chance Billy put that bullet in Adam, but Billy will undoubtedly deny it. Perhaps Billy will suggest that if he had gone after Adam, he would’ve finished the job.

Now that Billy is back on track with Victoria Newman (Amelia Heinle), he’s not keen on putting their family’s happiness in jeopardy. Billy may tell Nick that he wouldn’t risk it all over Adam, so Nick should mull over other options. Next, Rey Rosales (Jordi Vilasuso) will have a question for Sharon Newman (Sharon Case). He’ll ask if Sharon wants to move in together, so she’ll have a big decision to make.

This is huge step in a relationship, but Rey and Sharon will likely decide to take the plunge. They’re happy and in love – for now at least! Adam will be sticking around Genoa City, so that could certainly mess with “Shey” soon enough. It turns out Elena Dawson (Brytni Sarpy) will plan on sticking around as well. She’ll talk about leaving GC, but that’ll only make her realize how much she wants to stay.

Devon Hamilton (Bryton James) will be glad to know he’s still got a shot. He’s finding it hard to shake Hilary Hamilton (Mishael Morgan), but Elena’s the first woman who’s made him want to try. The Young and the Restless spoilers say “Elevon’s” new romance will continue, so it should be interesting to see what adventures await.

Y&R fans won’t want to miss all the action next week! We’ll give you updates as other news comes in. Stay tuned to the CBS soap and don’t forget to check CDL often for the latest Young and the Restless spoilers, updates, and news.

PREVIEW FOR NEXT WEEK! #YR pic.twitter.com/i2iNd8WvcJ