BY hellodrdavis on October 28, 2019 | Comments: 2 comments
Related : Soap Opera, Spoiler, Television, The Young and the Restless 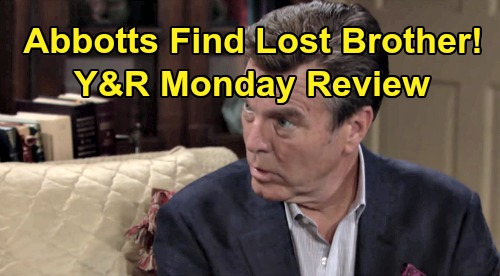 The Young and the Restless spoilers review for Monday, October 28, tease that Jack Abbott (Peter Bergman) and Traci Abbott (Beth Maitland) will welcome an old friend of Dina Mergeron’s (Marla Adams) to the house, Doris Dillington (Mary-Margaret Lewis). They’ll explain that they’ve been wondering about Dina’s past with Stuart Brooks (Robert Colbert), and Doris will at first act like it’s been so long ago that she doesn’t recall anything.

But after Jack explains that they’ve been watching Dina slip away and this is really important to them, Doris will confess that she knows more than she’s let on. She’ll say that she knows what happened on prom night, but that they might not like what they’re about to hear. She’ll go on to explain that Stuart was Dina’s scene partner for Hamlet in high school, and that the two had incredible chemistry.

Doris will say that while Dina was devoted to John Abbott (Jerry Douglas), she couldn’t shake Stuart, and that the two snuck off together at the prom after party. The next day at school, Dina seemed different and finally admitted that she and Stuart had made love that night, and that she felt guilty about it. Then, right after graduation, Dina decided not to go to college but to take a year abroad, at which point she dropped off the map.

Jack will be obvious to what Doris will be trying to say, but Traci will catch on that Dina must have been pregnant. Doris will go on to say that the child couldn’t have been John’s because Dina and John weren’t intimate at that time. After Doris leaves, Traci will go digging in a box from Mergeron that Dina brought back from France, Eventually, she’ll locate a copy of Hamlet that Dina used in school, and in it she’ll find a decree of adoption.

Jack will read that Dina had a baby boy, who was adopted by Ralph and Margaret Vanderway and raised in Chicago…and named Eric Vanderway. Of course, as Y&R viewers know, there’s currently another Vanderway on the Genoa City scene – Theo Vanderway (Tyler Johnson). Y&R spoilers say that Eric Vanderway (John Briddell) will soon make an appearance on the show, which may be in a flashback scene, as Theo has previously stated that his father passed away.

Meanwhile, on the new episode of Y&R on Monday, October 28, Billy Abbott (Jason Thompson) and Adam Newman (Mark Grossman) will come face to face at The Grand Phoenix. They’ll have a gruff standoff, with Billy not knowing whether Adam knows that he’s the one who tried to run him down on Route 7. They’ll go back and forth, with Adam asking a lot of questions about Billy’s rehab, then he’ll finally reveal that he no longer believes it was Victor Newman (Eric Braeden) who tried to run him down – he believes it was Billy.

Billy will refuse to outright admit it was him, and the men will go back and forth a bit before Adam asks who else was there that night who saved him. Billy won’t reveal that it was Chloe Mitchell (Elizabeth Hendrickson) who pushed him out of the way, saying that he prefers to keep this just between him and Adam.

After a little more bickering, Adam and Billy will discuss where they go from here, and they’ll each determine that they want to go build lives with their kids, so there will be no revenge or payback…they’ll just move forward and stay out of each other’s business. And with that, they’ll go their separate ways, each looking back to eyeball the other one last time.

It certainly seems like perhaps Billy and Adam have reached a real agreement here. Billy certainly wasn’t happy with Adam being back in Genoa City, but he seemed relatively even-tempered about the whole thing, like he’s really turned a corner and is able to go on with his life without obsessing over getting revenge on Adam for Delia Abbott’s (Sophie Pollono) death. At any rate, this seemed to put Billy’s recent troubles to bed.