BY Heather Hughes on September 6, 2019 | Comments: one comment
Related : Soap Opera, Spoiler, Television, The Young and the Restless 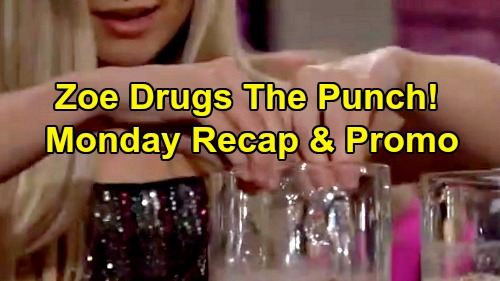 The Young and the Restless (Y&R) spoilers recap for Monday, September 9, tease that Adam Newman (Mark Grossman) will defend his actions. After filling Phyllis Summers (Michelle Stafford) in on the prescription switch, she’ll wonder if Adam’s going overboard on the scheming. Adam will insist Victor Newman (Eric Braeden) tried to run him down, so he’ll think his plot’s justified.

Meanwhile, Victor will grow weak at Crimson Lights. He’ll slump back in his chair, so a worried Nikki Newman (Melody Thomas Scott) will get him some water. Adam will be nearby as all this goes down, so he’ll mosey over to Victor. Y&R spoilers say Victor will push his son to leave, and Nikki will blame Adam for stressing Vic out. Adam will suggest he’s sorry Victor isn’t feeling well before he reconvenes with Phyllis.

The speed of Victor’s decline will leave Phyllis taken aback. Adam will suggest he doesn’t regret his plan, but he’ll still seem concerned. Phyllis will note that second thoughts would be natural. At Kyle Abbott (Michael Mealor) and Lola Abbott’s (Sasha Calle) apartment, Kyle will be agitated over a missing tie. Lola will assume this is really about Theo Vanderway (Tyler Johnson), so she’ll do her best to distract Kyle.

Soon after, Rey Rosales (Jordi Vilasuso) will show up. Lola will suggest that Rey might meet someone special at the Grand Phoenix opening, but Rey won’t have high hopes for that. Across town, Sharon Newman (Sharon Case) will talk to Nick Newman (Joshua Morrow) about the upcoming bash as well as Chelsea Newman (Melissa Claire Egan). Nick would like for Sharon and Chelsea to form a friendship.

Sharon won’t be willing to go that far, but she’ll still offer her approval. She’ll be glad Nick’s happy with his reunion. At the park, Mariah Copeland (Camryn Grimes) and Tessa Porter (Cait Fairbanks) will discuss getting some publicity shots of Tessa at the event. When Theo Vanderway (Tyler Johnson) appears with influencers Indio (Jules Aurora) and Tallulah (Briana Cuoco), he’ll contend that he could help Mariah out.

Mariah will insist she’s got it covered before talk turns to Tallulah and Indio’s outfits. The Young and the Restless spoilers say Mariah will suggest heading to Fenmore’s for dresses. Theo will gush about what a great team they make as he goes in for a hug and departs with the influencers. Once they’re alone, Mariah will tell Tessa she trusts Theo even less now.

At the ranch, Nate Hastings (Sean Dominic) will be on hand to check Victor after his setback. He’ll want to see some bloodwork results before he decides anything. Nikki will insist that Victor needs to skip Abby’s big night and just let her make him his favorite meal. Victor won’t be able to remember what he likes, but Nikki will shift his attention to slow dancing. Unfortunately, Victor will grow weak again and have to rest.

Back with Adam, he’ll make a bet with Phyllis at his penthouse. Phyllis will feel like Adam’s going to change his mind as Victor’s suffering gets worse. She’ll want Adam to stop targeting his family if she wins the bet. Adam will feel confident that’s not going to happen, so he’ll vow to think of something good to ask of Phyllis. He’ll be certain he’s going to emerge victorious.

After Phyllis exits, Adam will gaze at a picture of Victor before wadding it up. At the Grand Phoenix, Chelsea and Abby will be ready to get this shindig started. They’ll be excited about the opening, which guests will start arriving for. Theo won’t hesitate to push Kyle’s buttons; he’ll hint that he hopes the party doesn’t get too wild for Kyle.

Kyle will offer Theo a warning before he dances with Lola. Over with Devon Hamilton (Bryton James) and Elena Dawson (Brytni Sarpy), they’ll chat with Mariah and Tessa. Everyone will be all glammed up for the festivities.

Sharon will share an awkward moment with Rey before catching up with Tessa and Mariah. She’ll mention her upcoming trip, so Mariah will wonder if her mom’s running from Rey. Sharon will contend that she’s running to something instead. Nearby, Nate will reassure Abby about Victor’s condition before they mingle with Elena and Devon.

Back with Theo, he’ll deliver some instructions to Indio and Tallulah. Summer will get a kiss before Zoe appears and snarks about trying not to be clingy. She’ll insist she intends to leave Theo and Summer alone tonight.

Other Young and the Restless spoilers say Phyllis will crash the party, but she’ll surprise Chelsea and Abby by congratulating them. She’ll overhear Devon mentioning Chance Chancellor and the possibility that he’s behind the contested will.

After Theo accidentally drops a drink, the crowd will be distracted. That’ll be Zoe’s cue to go for the signature Grand Sangria pitchers. She’ll drug the drinks, which will set the stage for some chaos soon enough! We’ll give you updates as other Y&R news comes in. Stay tuned to the CBS soap and don’t forget to check CDL often for the latest Young and the Restless spoilers, updates and news.