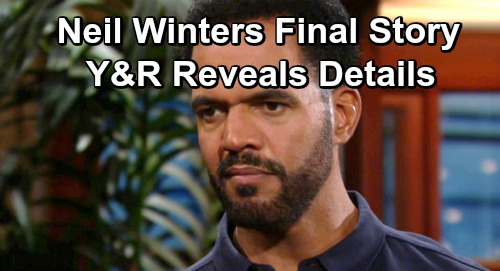 The Young and the Restless spoilers tease that Y&R’s plan to pay tribute to Kristoff St. John (Neil) will play out in a storyline that involves his character starting in late April. Details about the spring story haven’t been announced as the plot is just being created now by new executive producer, Tony Morina, and new head writer, Josh Griffith.

A fitting tribute could take various forms, as the circumstances involving Neil’s passing would seem likely to be addressed. His death, as opposed to any thoughts involving a recast, would allow the show to give both the character and the actor a respectful sendoff, while also honoring the legacy of the man who was part of the cast for twenty-eight years.

St. John filmed his last scenes for the show within the last two months. Y&R aired his final episode as Neil in early February. Fans who watched that show did so with heavy hearts, as they knew it would be the last time that great actor’s presence would be seen in real time.

Devoted Y&R fans recall that tribute was paid to Jeanne Cooper (Katherine) with a two-part, behind-the-scenes show that included many cast members offering personal reflections. Y&R also created a storyline where Murphy (Michael Fairman), Katherine’s husband, returned to Genoa City and announced that his wife had died while they were on a worldwide trip.

Jill (Jess Walton), Katherine’s longtime frenemy, then pursued a mystery that involved a music box, a blue necklace, and references to the likeness of Katherine that hung as a portrait in the Chancellor mansion.

Daytime drama’s viewers know that retrospectives are often offered prior to a longtime cast member’s planned departure, or passing. So, they can assume that a series of highlights, of which there are many, will be prepared and then presented as part of what will be Neil’s final bow.

It would seem reasonable to believe that characters from Neil’s past would be written back into the show. A memorial service would allow fiction to reflect real life, as characters and Y&R’s fans could celebrate Neil’s (St. John’s) life, while also grieving his loss. Surely this type of scenario would prove cathartic for all actors and employees who work behind the scenes on this daytime drama.

St. John will always be remembered as someone whose talent was unquestioned. He used his gifts to touch the hearts of millions, making their lives better.