The Young and the Restless Spoilers Next 2 Weeks: Christine’s Courtroom Murder Rant – Phyllis Loses Everything and More!

BY Heather Hughes on February 24, 2019 | Comments: one comment
Related : Soap Opera, Spoiler, Television, The Young and the Restless 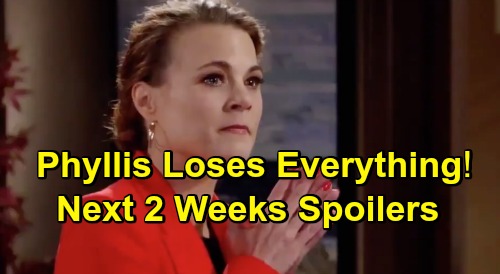 The Young and the Restless (Y&R) spoilers for the next two weeks tease that the excitement will rev up in Genoa City. During the week of February 25-March 1, Nick Newman (Joshua Morrow) will decide he doesn’t like Phyllis Summers’ (Gina Tognoni) true colors. He’ll dump her and throw her out of the house, but she’ll manage to stay in control at Jabot – for now.

Of course, Billy Abbott (Jason Thompson) will hope for major leadership changes. After discussing the matter with Jack Abbott (Peter Bergman), they’ll agree the Abbotts need to be running the show. At Billy’s suggestion, it looks like Jack will push Kerry Johnson (Alice Hunter) to assist them. Her sneakiness could be a crucial part of this takeover plot.

In the meantime, two important characters will sweat it out on the witness stand. Phyllis will have her turn eventually, but it’ll be Mariah Copeland (Camryn Grimes) who’s tackling tricky questions first. She’ll struggle as she works to avoid implicating Tessa Porter (Cait Fairbanks), especially when Michael Baldwin (Christian LeBlanc) asks Mariah who discovered the video at Dark Horse.

That video will take center stage soon enough. The Young and the Restless spoilers say Christine Williams (Lauralee Bell) will play it in court and get Phyllis to confirm it’s exactly what it looks like. The women rolled J.T. Hellstrom’s (Thad Luckinbill) body up in a rug and drove him for burial in Chancellor Park.

Next, Kyle Abbott’s (Michael Mealor) fears will grow stronger. Will Lola Rosales (Sasha Calle) take a turn for the worse? If so, it doesn’t look like the crisis will last long. During the week of March 4-8, Kyle will make a deal with someone. Perhaps he’ll convince Arturo Rosales (Jason Canela) to call a truce so he can see Lola. It might help to hear Kyle’s voice by her side more often.

Y&R spoilers say Lola will be on the mend sooner or later, so that’s good news. Until then, let’s focus on Phyllis’ downfall. She’ll face a crushing loss, so Jack and Billy’s takeover strategy might be a real winner. Phyllis seems poised to lose everything she cares about, but that’s just the price of immunity.

As for Victoria, she’ll be in a position where she has to defend herself. Maybe she’ll finally have a chance to publicly share her version of what happened with J.T. Victoria deserves to have her say and describe what a monster J.T. was. She loved him once upon a time, but he was a cruel abuser in the end.

Other Young and the Restless spoilers say Michael will take on a serious challenge. Thanks to Phyllis, Christine feels like she’s got a slam-dunk case. Michael will soon realize his job’s going to be tougher than he thought!

The next two weeks are sure to bring some intriguing developments. We’ll give you updates as other Y&R details emerge. Stay tuned to the CBS soap and don’t forget to check CDL often for the latest Young and the Restless spoilers, updates, and news.