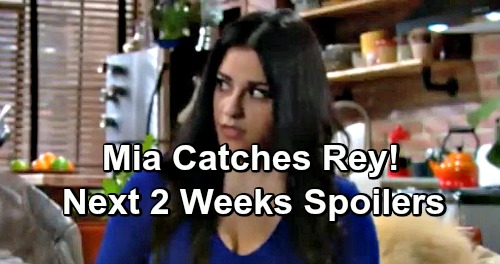 The Young and the Restless (Y&R) spoilers tease that the next two weeks will bring some bombshells. During the week of January 7-11, Lily Ashby (Christel Khalil) will write a letter to her husband. She’ll want to explain some things to Cane Ashby (Daniel Goddard) and let him know where they stand.

Lily will admit she’s been distancing herself from Cane, Mattie Ashby (Lexie Stevenson) and Charlie Ashby (Noah Alexander Gerry) on purpose. She’ll be sorry if it hurts her family, but it’s what she has to do to survive.

Lily can’t physically be with Cane and the twins, so she finds it easier to put emotional walls up, too. Cane will learn that Lily’s just trying to harden her heart enough to survive this ordeal.

Meanwhile, Mackenzie “Mac” Browning (Kelly Kruger) will catch Reed (Tristan Lake Leabu) off guard. It looks like she’ll show up to J.T. Hellstrom’s (Thad Luckinbill) memorial service, which Reed will push for. This event will be held in Victoria Newman’s (Amelia Heinle) living room, so it’ll be a small gathering for the people closest to the situation.

Unfortunately, Y&R spoilers say that’ll be a big mistake. When Phyllis fears Nikki Newman (Melody Thomas Scott) is going to confess, she’ll blurt out that Victoria was abused by J.T.

The guests who weren’t in the loop will be stunned, including Reed. The Young and the Restless spoilers say Reed will have a total meltdown, so stay tuned. At the GCPD visiting area, Jack Abbott (Peter Bergman) will stop by to see Victor Newman (Eric Braeden). He’ll be pleased that “The Moustache” is locked up and going down.

Over with Kyle Abbott (Michael Mealor), he won’t be able to hold his feelings in anymore. Kyle will tell Lola Rosales (Sasha Calle) he loves her and she’ll return the sentiment.

Next, Sharon Newman (Sharon Case) will get stuck at a motel with Rey Rosales (Jordi Vilasuso). After pitching in on a case, Sharon will find herself sharing the only room available with the man she’s pining for.

During the week of January 14-18, Mia Rosales (Noemi Gonzalez) will put Rey to the test. She may be suspicious of Rey and Sharon’s connection after their night together. Elsewhere, Ana Hamilton (Loren Lott) and Fenmore “Fen” Baldwin (Zach Tinker) will be in a tight spot. They’ll have to work together if they want to get out of it, so a real spark could develop in the process.

Other Young and the Restless spoilers say Victor and Nick will team up. Nick already agreed to help Victor, but they may nail down a clearer plan. The sooner they catch the person framing Victor, the better.

Finally, someone will order Nikki to be put under surveillance. It sounds like Rey will have Nikki followed and watched in hopes of tripping her up.

Will Rey find the proof he’s looking for? We’ll give you updates as other Y&R news comes in. Stay tuned to the CBS soap and don’t forget to check CDL often for the latest Young and the Restless spoilers, updates and news.