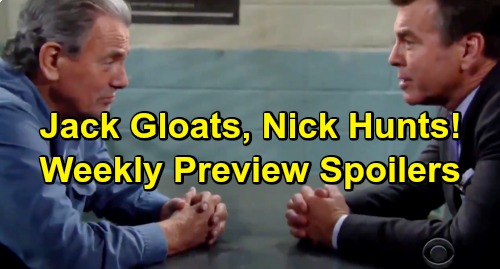 The Young and the Restless (Y&R) spoilers for the week of January 7-11 tease that the false charges against Victor Newman (Eric Braeden) will bring serious drama. Phyllis Summers (Gina Tognoni) certainly wouldn’t mind if Victor went down for J.T. Hellstrom’s (Thad Luckinbill) murder. She hates the guy’s guts, so why wouldn’t she want him locked up?

In fact, Phyllis will look at it as killing two birds with one stone. The cover-up crew needs someone to take the fall and Victor deserves to be behind bars for all his previous crimes. Phyllis will think this takes care of everything, so she won’t hesitate to play up Victor’s guilt to Nick Newman (Joshua Morrow). She’ll note that all the evidence points straight to Victor and at the moment, that’s true.

Y&R fans know that Phyllis, Nikki Newman (Melody Thomas Scott), Victoria Newman (Amelia Heinle) and Sharon Newman (Sharon Case) have a secret alliance. Nikki killed J.T. to save Victoria from an attack and the others helped her bury the body. However, someone out there has been planting evidence against Victor. A baffled Nick will suggest that it’s as if somebody’s trying to frame him.

Victor has plenty of enemies, so it really shouldn’t come as a huge shock. The real shocker could be who’s doing the framing! Could J.T. somehow be alive? Is he back for his revenge? It would make sense for J.T. to set Victor up for his murder and torment the fab four in the process.

Regardless, The Young and the Restless spoilers say Nick will seek answers. He’ll be determined to find out who’s targeting Victor and hopefully clear his name. Victor and Nick have had their fair share of issues, but Nick doesn’t want his dad in jail for a crime he didn’t commit.

That’s especially true when Nikki needs him right now. She’s still recovering from severe injuries and she’s a mess over all the stress. Victoria will also hope Victor gets off the hook soon. She’ll get into a fierce argument with Phyllis about it this week. Phyllis will snarl that the longer Victor suffers, the better. As the confrontation escalates, Victoria will give Phyllis a hard slap to the face.

While Victoria and Phyllis face off, Jack Abbott (Peter Bergman) will pay Victor a visit. He’ll do some gloating as he wonders if Victor actually murdered J.T. Vic will maintain that he’s innocent, but Jack won’t really think it matters. He’ll argue that guilty or not, Victor is going down!

Nevertheless, Victor will inevitably walk free sooner or later. That’ll leave him to protect Nikki, who will admit she knows who killed J.T. this week. The Young and the Restless spoilers say Victor will immediately silence his wife. He won’t want Nikki to breathe another word about this ever again.

This J.T. saga is definitely heating up, so don’t miss the twists and turns ahead. We’ll give you updates as other Y&R news comes in. Stay tuned to the CBS soap and don’t forget to check CDL often for the latest Young and the Restless spoilers, updates and news.