The Young and the Restless Spoilers: Nick Turns Against Phyllis – Phick Ends In Anger 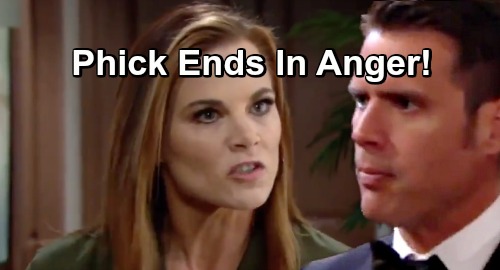 The Young and the Restless spoilers tease that Nick (Joshua Morrow) will chide his girlfriend and destroy Phick as the new year gets going. Phyllis’ (Gina Tognoni) coming self-centered move against the coverup crew will provoke Nick’s always fragile emotions.

Nick and Phyllis are alike in some ways, including their focus upon themselves. That’s why Miss Summer’s actions to abandon Nikki (Melody Thomas Scott), Vickie (Amelia Heinle), and Sharon (Sharon Case) will cause Nick to react negatively. He won’t see that his recently revived significant other is simply looking out for herself, which mirrors much of his own behavior this year.

Dark Horse is Nick’s brazen attempt to spit in his father’s face. Victor (Eric Braeden) did not see that fully disrespectful act coming, which allowed Newman Enterprises to be hit, hard. The Moustache also had his medical history publicly exposed in order to hinder any response.

But why cite Victor’s recent history if the lead to this story involves Phyllis? Because Nick’s feelings for anyone can turn in an instant and when they do, damage follows.

As Y&R viewers recall, Nick felt genuine compassion for his father after a then-unknown attacked left his father for dead at the Ranch earlier this year. A partially disabled Victor was eventually able to communicate to Nick that J.T. (Thad Luckinbill) was the deranged lunatic the show’s writers invented. Previously, Luckinbill’s character had been a normal human being for over a decade.

So, Nick trailed J.T., who is apparently dead, while also agreeing to return to Newman. Then, Nick got his ire up and quit because he believed Victor was pitting him against Vickie (Amelia Heinle) by giving him her job.

Wrong, it wasn’t Vickie’s job, but a high level corporate position no one owns at the company Victor founded. Nick, being entitled, like his sister, wildly disagreed, went nuts, told the man who helped to give him life off for the eight-hundredth time, impersonated J.T. (yes, that really happened), and has worked against Victor ever since.

Nick is all about Nick, while always proclaiming that his father’s self-centeredness if the Newman scourge. He, like the Moustache, rationalizes all actions as part of some grand plan to help his children. Hiding behind one’s off-spring in this fashion reveals Nick as Victor the sequel, or actually worse.

While Nick’s view of his dad is skewed, some points made about the Black Knight are undeniable true. But in being his son, Nick should be able to recognize his seemingly inherited traits (via genetics and environment) and block them. He didn’t and isn’t.

Now, Phyllis is the problem? Ah, Nick, you are always ready to condemn. How about helping others to be better by first improving yourself! CDL is a leading source for everything linked to The Young and the Restless. Check back regularly for Y&R spoilers and news!