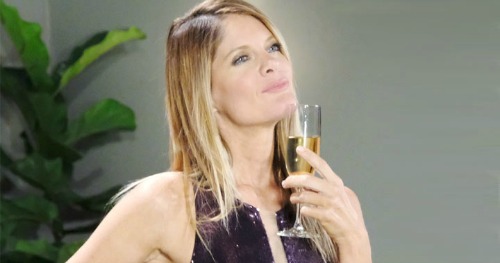 The Young and the Restless (Y&R) spoilers tease that Phyllis Summers (Gina Tognoni) will dust herself off and rise from the ashes. She burned her life to the ground in many ways, but she’s no quitter! Phyllis is the kind of gal who keeps fighting and comes back with a vengeance. As luck would have it, Y&R has the perfect opportunity for a Phyllis reset with Michelle Stafford’s return.

It’s really a shame it all had to go down like this. Tognoni is a powerhouse actress with Daytime Emmys to prove it. She made the role of Phyllis her own and has earned many fans at the CBS soap. However, business is business. Y&R seems to think Stafford’s comeback will convince old viewers to watch again and perhaps please current viewers who haven’t been happy.

Stafford is the one true Phyllis for some fans, so maybe we shouldn’t be too surprised the show jumped at the chance to get her back. It’s disappointing that Tognoni had to be given the shaft, but let’s look at the positives here. The Young and the Restless has a great return arc just waiting for Stafford to jump into. As they reintroduce Stafford’s version, her character can come roaring back as well.

Phyllis has lost everything that matters except for Summer Abbott (Hunter King). She lost Billy Abbott (Jason Thompson) and later lost Nick Newman (Joshua Morrow). Phyllis also lost the Jabot CEO spot and Kerry Johnson aka Dominique Caroll (Alice Hunter) as her only friend. She even lost what little respect GC residents might’ve had for her by signing an immunity deal and ratting out her partners in crime.

Now that Phyllis is at her lowest, she can stage a huge comeback. There’ll be plenty of possibilities just waiting for Stafford’s version to play. Between the hot storyline and Stafford’s return, The Young and the Restless spoilers say this could bring some solid buzz for the show. That’s undoubtedly what the new regime’s hoping for.

Are you eager to see what’s ahead on the CBS soap? Will you miss Gina Tognoni or is Michelle Stafford your favorite Phyllis? We’ll give you updates as other news comes in. Stay tuned to Y&R and don’t forget to check CDL often for the latest Young and the Restless spoilers, updates, and news.