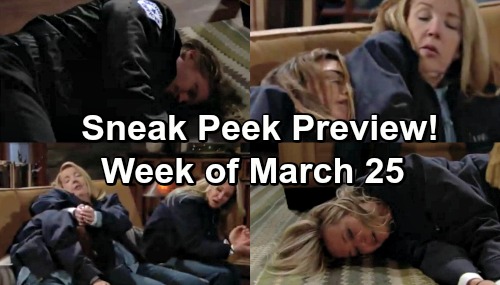 The Young and the Restless (Y&R) spoilers sneak peek preview for Monday, March 25, tease that some shocking moments are coming up. Thanks to a special Facebook live chat featuring Michael Mealor (Kyle Abbott), Hunter King (Summer Newman) and Sasha Calle (Lola Rosales), Y&R fans have been given a sneak peek at the action. A fun trivia game unlocked a new scene from Monday’s thrilling episode.

The show’s Twitter account later posted the clip as well, so The Young and the Restless viewers are excited about this storyline’s conclusion. These March madness preemptions couldn’t have come at a worse time, but Y&R will thankfully return Monday and pick right up where they left off.

The Young and the Restless spoilers say J.T. Hellstrom’s (Thad Luckinbill) derailed scheme will leave the cabin crew in a real bind. He caused a gas leak before gripping his head and collapsing in pain. J.T.’s head issues will undoubtedly be explained later, but we have to focus on the imminent danger first. The trapped ladies could really use some help!

In the preview video, Victoria Newman (Amelia Heinle) once again tries to awaken J.T. She calls out to him along with the others, but J.T. will remain out cold. Victoria will start to sway as she insists they need air. Unfortunately, they’ll have no way to get it. Their hands and feet are bound, so they’ll be stuck gasping as the fumes fill the room.

Victoria will be the first of the ladies to pass out. She’ll lean over on a worried Nikki Newman (Melody Thomas Scott), who’ll push her daughter to stay awake. Alas, it won’t be long until Nikki loses consciousness, too. That’ll leave Sharon Newman (Sharon Case) to try and play the hero. She’ll hop off the sofa and attempt to do something about their predicament, but her efforts will fail miserably.

The Young and the Restless spoilers say Sharon will conk out and fall to the floor. Things will look bleak, but a rescue mission’s looming. Victor Newman (Eric Braeden), Nick Newman (Joshua Morrow), Billy Abbott (Jason Canela) and Phyllis Summers (Gina Tognoni) will be on hand to form a plan. Rey Rosales (Jordi Vilasuso) will join in soon enough, so they’ll have a solid team put together.

There’s a good chance Rey will be the one to pick Sharon up and carry her out. It looks like he’ll save her life and undo some of the damage caused by his betrayal. The Young and the Restless spoilers say Monday’s episode will deliver loads of excitement, so don’t miss it.

Are you ready to see this dramatic rescue and the chaos still to come? We’ll give you updates as other Y&R news emerges. Stay tuned to the CBS soap and don’t forget to check CDL often for the latest Young and the Restless spoilers, updates, and news.