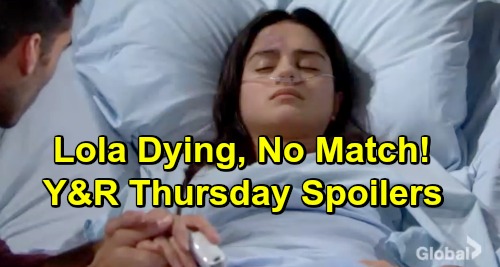 The Young and the Restless (Y&R) spoilers for Thursday, February 28, tease that Kyle Abbott’s (Michael Mealor) concerns will grow stronger. On Wednesday’s episode, he gets Mariah Copeland (Camryn Grimes) to do a live GC Buzz report for Lola Rosales (Sasha Calle). The goal is to get people over to the hospital for testing and hopefully find a liver donor match.

Unfortunately, it appears that strategy won’t bring fast results. Kyle will be more fearful than ever this Thursday, so maybe no matches will be found. He’ll worry that he’s going to lose his love, but he’ll try to hold out hope. Kyle certainly won’t want to think about the alternative. He’ll have to believe there’s someone out there who could come through for Lola in her time of need.

Meanwhile, Devon Hamilton (Bryton James) will make a sacrifice of some sort. Since he recently visited Lola, it’s possible they’ll work him in the story as a last-minute donor match. Devon’s still mourning the loss of Hilary Hamilton (Mishael Morgan), so saving a life might help him heal.

However, it makes more sense for The Young and the Restless to pick a truly dramatic option. Mia Rosales (Noemi Gonzalez) would have to spoil her pregnancy plot to save Lola. Summer Newman (Hunter King) would be saving her competition for Kyle’s heart. They would be putting Lola above their own selfish desires, so one of those possibilities might be the way to go.

In the courtroom, another round of Y&R turmoil’s looming. Christine Williams (Lauralee Bell) will show off her most incriminating evidence, which happens to be the video from the Dark Horse servers. She’ll play the footage of Nikki Newman (Melody Thomas Scott), Victoria Newman (Amelia Heinle), Sharon Newman (Sharon Case) and Phyllis Summers (Gina Tognoni) moving the body into the trunk.

Obviously, this proof will make them all seem like horrible criminals. Any normal person would’ve called the cops after everything that went down with J.T. Hellstrom (Thad Luckinbill). Instead, the cover-up crew rolled J.T.’s corpse in a rug, drove to Chancellor Park and buried him. This does NOT look good for the girls’ night gang. Phyllis is just lucky she got an immunity deal.

After the video takes center stage, Christine will call Mariah Copeland (Camryn Grimes) to the stand. Mariah will have to dodge some tricky questions, but she’ll manage to keep Sharon and Tessa Porter (Cait Fairbanks) out of the story at first. Too bad Michael Baldwin (Christian LeBlanc) will derail that plan on cross-examination!